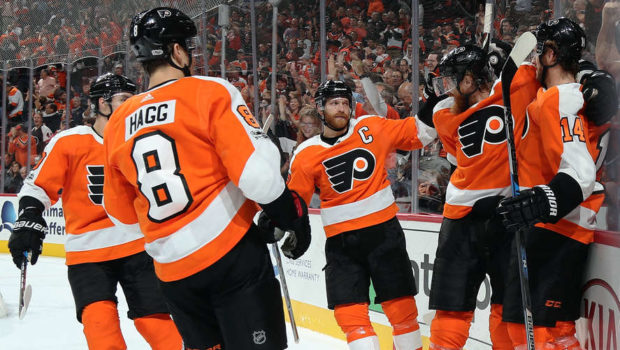 CAN ANY FLYERS SCORE BESIDES GIROUX, COUTURIER AND VORACEK?

Let’s just call this a must-win game for the Flyers.

The Flyers (8-6-2) play their first of back-to-back games against the Wild (6-7-2), with both teams looking to build off impressive wins on Thursday night.

The Orange and Black topped the Blackhawks 3-1 on goals by Claude Giroux, Sean Couturier and Jake Voracek, while the Wild blanked the Canadiens 3-0 on a third-period hat trick by Zucker, who scored each of Minnesota’s last five goals.

Through 16 games, Giroux, Couturier and Voracek have combined for 23 goals and 60 points, behind only the Tampa Bay Lightning’s top line of Steven Stamkos, Nikita Kucherov and Vladislav Namestnikov (32 goals, 77 points in 17 games).

But there hasn’t been much offense beyond that for the Flyers, who have gotten no goals from Wayne Simmonds in his last eight games and one goal from Travis Konecny in his last 12.

“It’ll happen eventually,” Simmonds, who opened the season with six goals in his first eight games, told the Inky. “We just have to keep working hard. The goals will come.”

The Wild, who are without star winger Zach Parise (lower back surgery) until after Christmas, have gotten six goals from Chris Stewart and five from Eric Staal, but are waiting for Marcus Foligno and Tyler Ennis, each with three goals, to heat up.

Minnesota scored four short-handed goals in their last eight games but lost three straight before beating the Canadiens and won back-to-back games only once this season.

The Flyers are still without rookie center Nolan Patrick, who will miss his eighth straight game with a head injury and is expected to remain in Philly when the Flyers visit Minnesota on Tuesday.

Goaltender Brian Elliott, who stopped 38 shots Thursday, is expected to get the start against the Wild. He is 9-2-0 with a 2.07 goals-against average and .915 save percentage in his career against Minnesota.

“I felt good out there (against the Blackhawks),” Elliott said. “I thought we did a good job defensively. That allowed me to lock in on the puck. We took away lanes. Took away passes. That’s what you have to do.”

Devan Dubnyk, who made 41 stops in his shutout against the Canadiens, is expected to get the call for the Wild. He is 2-5-1 lifetime against the Flyers with a 2.64 GAA and .918 SP.