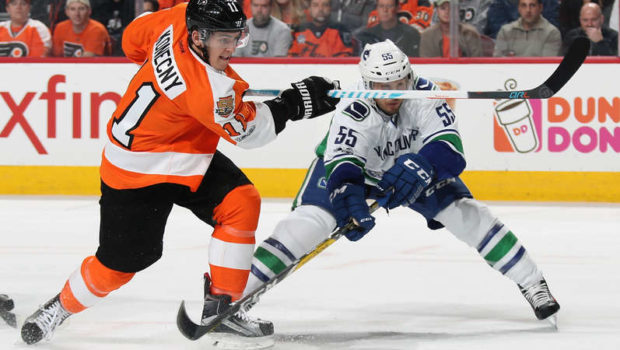 CAN FLYERS (REMEMBER THEM?) RIGHT SINKING SHIP AGAINST DEVILS?

The Flyers, who haven’t played in what seems like forever, are back today against the Devils, and they have make no changes.

It’s almost as if they think they are sitting pretty rather than having lost 9 of their last 11 games heading into their bye,

“Just because things are going bad doesn’t mean you have to jump ship right away,” Shayne Gostisbehere said. “I think for us it’s just we know we’ve got the guys in the room to do it. We know we have the system to do it, too. It’s about us, how we prepare, how we mentally prepare and focus and just put in a good 60 minutes.”

The Flyers have lost five of their last seven games against the Devils and only one of those games did the Flyers allow more than 25 shots.

“I think at the end of the day the guys in the dressing room have a good understanding that we’ve put ourselves in this position and it’s up to us to get us out of it,” goalie Steve Mason said. “I don’t think guys are looking for outside help to help us along here. I think everyone’s confident we can do it internally. It’s just a matter of each guy focusing on their own individual job and nothing more than that.”

Most of the players did leave town, it seems. Even coach Dave Hakstol, obsessed with preparation and improving a team that is now out of the playoff picture, got away. For one day.

“Hey, we’ve had a rough couple of weeks where we haven’t been able to do the things that we need to and want to consistently, but for me I’m very confident in this group and in this team,” Hakstol said. “For us, I think what the players said is probably true: it’s a real good time for them to have a bit of a mental and physical break. Now it’s time for us all to get back here and back to work.”

They’ll do it with almost an identical roster from their last game, a 5-0 blowout loss to the Washington Capitals. Wayne Simmonds, the Flyers’ lone All-Star, is now on the third line with Brayden Schenn and, likely, Dale Weise. Matt Read appears ready to return to the lineup and, in Game 47, the Flyers will finally have a completely healthy roster for the first time all season. Travis Konecny, it appeared in Friday’s practice, seems likely to be a healthy scratch up front with Nick Schultz and Brandon Manning sitting on defense.