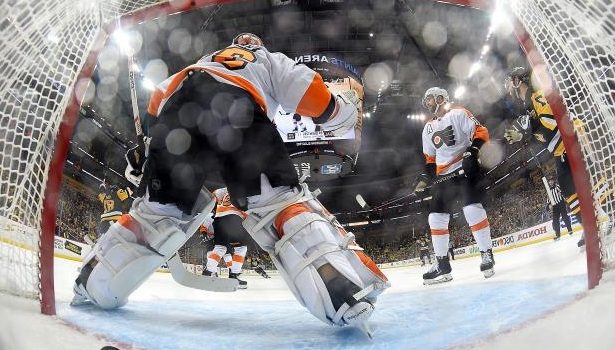 CAN FLYERS RECOVER? PSYCHOLOGICAL SCARS MAY BE TOO MUCH!

Can the Flyers recover from last night’s embarrassing 7-0 wipeout by the Pens in game 1 of their Cup series?

But the psychological scars inflicted by the Pens may be too much to overcome for goalie Brian Elliott (above) and the rest of the Flyers, who, by the way, lost all four regular season games to the defending Stanley Cup champ Pens.

Captain Claude Giroux cited three teammates for playing “great,” justly excluding himself from the select company — specifically for making “a lot of bad plays” on the Flyers’ 0-for-4 power play.

When a hockey playoff game is decided by a touchdown and extra point, it probably lacked turning points.

If Game 1 turned against the Flyers, it was when they failed to put so much as a single shot on Matt Murray during two power plays after the Penguins staked their goalie a 1-0 lead in the first period.

The Penguins had added a couple of goals by the first intermission, and there wouldn’t be a missed-offside-goal to turn around this Game 1 like Danny Briere’s when these franchises last opened a postseason series in Pittsburgh.

It was curious, too, that Flyers coach Dave Hakstol backed goalie Brian Elliott after Game 1. In game 2, If Hakstol goes with Elliott, who isn’t sharp after playing in only parts of three games following two months missed, the Flyers’ chance to beat the Penguins are like that manual: nonexistent.

Petr Mrazek better be next.

He also better be able to channel Dominik Hasek’s prime if the Flyers continue to afford Crosby and Evgeni Malkin time and space. What should frighten Mrazek or whomever is the Flyers’ Game 2 goalie is not Crosby beginning his quest for a third consecutive Conn Smythe Trophy with a hat trick, but rather Malkin gaining confidence from his goal Wednesday night.

Only one of Malkin’s 42 regular-season goals came in the Penguins’ final seven contests. A consistent point producer who becomes a scoring machine with even a whiff of confidence, Malkin needed to smell himself a snipe in his start to this postseason.

A breathing-easy Malkin is the last thing the Flyers need now that they need to win four of six from an opponent that has yet to be beaten four times in any playoff series with Mike Sullivan behind the bench.

Still, the Flyers need not feel as though Game 2 is a must-win. It is, but they will not win it by pressing.

Play better. Start by playing at all. This is a good enough recipe for Hakstol’s club going forward.

And, as Giroux said, “a little more attitude” would help.

Also, perhaps the Flyers can find comfort in knowing teams that won by three or more goals went 6-9 in the following games of series last postseason.

Then again, the Flyers — by their own coach’s admission — “looked tight” early in Game 1. Maybe, as Hakstol mused, that tightness was “something we just had to get through in this hockey game.”

He can only hope.

The other possibility is the Flyers actually are how they looked throughout Game 1: overmatched.