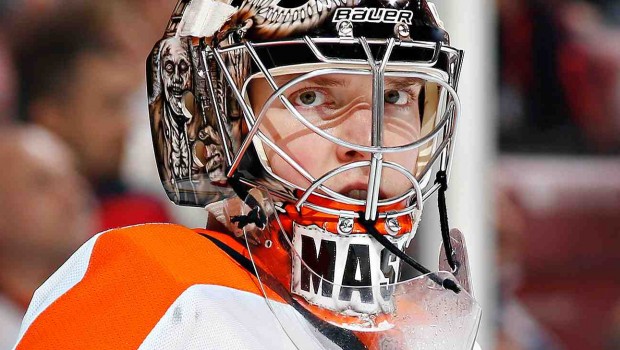 CAN FLYERS CONTINUE THEIR REMARKABLE RUN TO PLAYOFFS?

The Flyers have inched back into the playoff picture without starting goalie Steve Mason.

Even Flyers chairman Ed Snider has expressed surprise that the team has crept back into the NHL playoff race after starting this season so miserably.

With tonight’s game at Carolina now crucial, suddenly the Flyers are just four points back after their weekend sweep of the Nashville Predators and Washington Capitals.

Considering where the Flyers were less than two months ago, no wonder Snider is surprised!.

Following a 5-2 loss to the New Jersey Devils back on Jan. 3, extending their losing streak at the time to five games, the Flyers were just 14-18-7 on the season and 10 points out of a playoff spot, sitting behind five teams in the Eastern Conference. Since then, they have earned at least a point in 16 of their 21 games and have climbed to within four points of a playoff spot as they try to overcome a terrible start for the second season in a row.

But what’s most amazing about this recent surge as how they have done it.

1) Over the past 21 games the Flyers have scored 53 goals. Claude Giroux and Jakub Voracek, their best and most productive players this season overall, have combined for only seven of them. Their leading goal-scorers over that stretch: Wayne Simmonds (nine), Chris Vande Velde (six) and Michael Del Zotto (five). Simmonds isn’t a huge surprise because he is one of the best power forwards in the league. But the next two are not the names you might expect up there. The Flyers signed Del Zotto to a one-year contract in August after Kimmo Timonen was diagnosed with blood clots.

2) They haven’t had starting goalie Steve Mason for 13 of the past 21 games, something that should have, in theory, been a crippling blow to their slim playoff chances when he went down with a knee injury. For all of the criticism the Flyers received when they traded for Mason and then re-signed him, his turnaround has been one of the more surprising individual stories in the league over the past year. For years one of the worst goalies in the league, Mason was sensational this season before his injury proving that, once again, nobody really has any idea what they are doing when it comes to evaluating goalies and that they are the most maddening players in the NHL.

But even though Mason hasn’t appeared in a game since Feb. 8, the Flyers have still earned nine of a possible 14 points during that stretch (a points percentage of .642, which would be a 105-point season over an 82-game stretch) and lost only one game in regulation.

What has helped has been the fact the team in front of their goalies — Mason, Ray Emery or Rob Zepp — has simply played better, more efficient hockey overall. They are allowing fewer shots than they did over the first 39 games of the season and they are controlling possession more.

Put it all together, and you have a team that has made up six points in the playoff race in 21 games and is trying to chase down a Boston team that, until its blowout win in Chicago on Sunday, seemed to be circling the drain.

Can the Flyers actually pull this off?

Back in November we looked at what it would take for teams to make the playoffs(assuming 95 points was the minimum) and how rare it is to overcome even a four-point deficit that early in the season (since 2005-06, only two teams have done it). Well, again … the Flyers were 10 points out during the first week in January.

Working in their favor is that they are not only playing pretty decent hockey right now as a team, but they are also going to get Mason and Timonen back at some point in the not-to-distant future. You also have to think that Giroux and Voracek are going to start filling the net again.

It has taken them seven-plus weeks of them playing hockey at what equates to a 109-point pace over a full season to get six points closer to a playoff spot. They still have four more points to go over the final month and a half just to tie the team they’re chasing. The team currently occupying the final playoff spot in the East, Boston, is on a 93-point pace this season.

For Philly to top that and earn 94 points it needs a 15-6-1 record over the final 22 games. When you combine that with their current stretch, that that would mean the Flyers would have to finish the season on a 27-11-5 run over the second half of the season.

Does that seem like something this roster is capable of?

There is no doubt the Flyers are playing better hockey. And they have, at the very least, made things a little more uncomfortable for the Bruins. But when you look at what they likely still have to do on top of what they have already done over the past 20 games, it just seems like it might be asking too much.