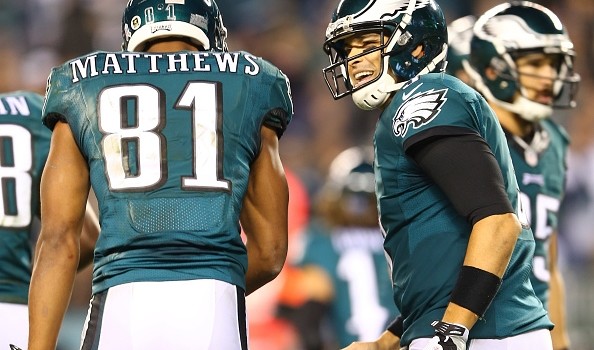 As the Eagles scramble their offense to adapt to back-up quarterback Mark Sanchez, the Tampa Bay Bucs are building on a win.

Jameis Winston will try to lead the Buccaneers to consecutive wins for the first time in two years when they visit the ailing Eagles on Sunday at the Linc.

Philly (4-5) hopes to avoid consecutive losses and will likely have to do it with Sanchez under center. Sanchez replaced Sam Bradford last week after he suffered a separated left shoulder and a concussion on a hard hit during the third quarter of a 20-19 home loss to Miami.

X-rays were negative for Bradford on his non-throwing shoulder, and although he wants to play through it, signs point to Sanchez getting his first start.

He finished 14 of 23 for 156 yards in his first action this season. Five Eagles drives led by Sanchez ended with a field goal, two punts, an interception and a turnover on downs.

The Birds handing the ball to Sanchez is nothing new as he started the final eight weeks last season. The six-year veteran replaced Nick Foles in Week 9 and led the Eagles to a win at Houston before going 4-4 the rest of the way.

Sanchez set a franchise record with a 64.1 completion percentage, but he threw 11 interceptions and lost three fumbles as the Eagles missed the playoffs at 10-6. Sanchez was intercepted last week with the Eagles at the 9-yard line and a chance for a go-ahead field goal with just over four minutes to play.

But confidence might be wavering with the wide receivers he will be throwing to.

The group was expected to be a strength for the Eagles, led by high draft picks Jordan Matthews, Josh Huff and Nelson Agholor along with veterans Riley Cooper and Miles Austin. Instead, they have most of the team’s 21 drops and have been overshadowed in the passing game by tight ends and running backs.

Matthews has 51 receptions for 552 yards and two touchdowns, while the next highest receiver is Austin with 12 catches for 212 yards and a score. Tight end Zach Ertz (36 catches for 382 yards) and running back DeMarco Murray (35 for 268) rank second and third on the team in receiving yards, while tight end Brent Celek had four catches for 134 yards against the Dolphins.

Philly ranks in the bottom third of the league with 11 touchdown receptions, but Tampa Bay’s defense has allowed five receivers to go over 100 yards. The Eagles have won three straight in this series and two of the last three in Philadelphia.

The Buccaneers (4-5), though, seem to have found a groove behind the rookie Winston. A 10-6 win over Dallas last week was their third in five games, and a victory would push the Bucs to .500 or better this late in a season for the first time since November 2012. They haven’t won consecutive games since Nov. 17-24, 2013.

Winston’s four-game streak without a turnover was snapped with a pair of interceptions against the Cowboys, but he completed 22 of 39 passes for 264 yards. He capped a 56-yard drive with the winning 1-yard touchdown plunge with 54 seconds to play.

Never mind that Winston caught a break as his fumble one play earlier was wiped away with a defensive holding penalty. He has the Buccaneers with twice as many wins as a season ago and equal to the number they posted in 2013.

Reaching the playoffs isn’t out of the question, something Tampa Bay hasn’t done in seven years.

“We talked about being relevant. We are. We’re in the mix,” coach Lovie Smith said. “Everything that we set in front of us is there. So that’s the carrot. It would be great to win two in a row, great to get to .500.”

While Winston has helped Tampa Bay regroup from a 1-3 start with a passer rating of 88.0 in his last five games, the defense should merit some credit – especially for the win over Dallas.

The Buccaneers, who coughed up a 24-point lead at Washington last month and let a 17-point advantage slip away during an overtime win at Atlanta on Nov. 1, held the Cowboys to 216 total yards, including 42 on 21 rushing attempts – both season bests.

“We’re closer to playing better technique, sound football. About as close as we’ve been in a long time,” Smith said. “We’re not the same old Bucs. … I’m just anxious to see what we can do the second half of the season.”