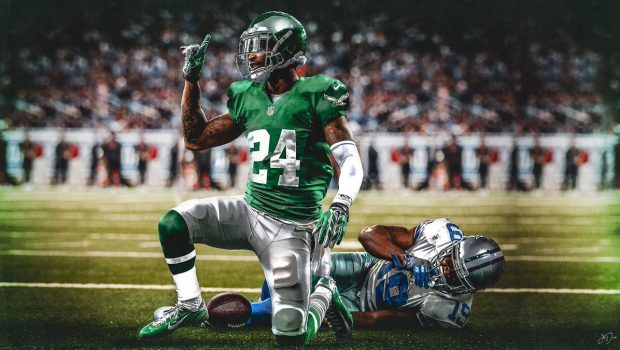 CAN EAGLES SLAY LIVE UP TO HYPE VS. WFT’S MCLAURIN TOMORROW?

The Eagles have been longing for a shutdown cornerback for a long time.

Does Nnamdi Asomugha and his $40 million 2011 contract ring a bell?

Not to mention, his meltdown?

That’s why they traded for Darius Slay.

He’s was a Pro Bowler the past three seasons with the Lions and earned first-team All-Pro honors in 2017.

Eagles defensive coordinator Jim Schwartz has not had a cornerback as talented as Slay since he arrived in Philly in 2016.

We’ll find out tomorrow if Slay is the real deal or just a hype.

The Eagles open their 2020 season Sunday versus Washington, meaning Slay will be tasked with slowing down rising star wide receiver Terry McLaurin.

“I just know what type of player he is and how talented he is as a young guy,” Slay said this week.

“Like I said, I think he’s a very talented guy, he can stretch the field, he’s good at it and he competes every play. That’s what I learned about him mostly, during the game and then watching him this offseason.”

The two had a great battle last season when Slay was with Detroit, as McLaurin totaled just three receptions for just 42 yards against the cornerback. However, McLaurin was targeted 10 times in that contest and had the potential to do a lot more damage had then-rookie QB Dwayne Haskins not missed him on a few throws.

Slay’s complementary stance on McLaurin is nothing new. Last season, the cornerback said the Washington wideout was the second-hardest wideout he covered last season, only behind Los Angeles Chargers pass-catcher Keenan Allen.

“To be honest, that whole year, besides Keenan Allen, he was my hardest one that I covered that whole year,” Slay said on McLaurin in March. “He probably would have scored on me two times.”

Allen is a three-time Pro Bowler and arguably the best route runner in the NFL. That’s great company for McLaurin to be in.

Perhaps the Eagles had McLaurin in mind when they decided to trade for Slay this offseason.

In Detroit, Slay developed a reputation for following the opposition’s best receiver. That’s not a philosophy Schwartz has used in Philadelphia yet, but there’s reason to think that might be different come Sunday.

“I think [Schwartz will] hear it loud and clear,” Slay said. “He’s an understanding coach, and he knows I want to compete, so if it ever boils down to it, I’ll go there to it and just say ‘Hey, coach, I want to do this, I want to do that.’ I think he’d believe and trust in me to get the job done and handle it.”

While Slay has made his preference clear, he remains adamant he will do whatever the team asks him to do, whether that means following McLaurin or not.

“We have a great mutual understanding on what needs to be done, and I’m a firm believer in teamwork, whatever the coach needs me to do, I’ll do it,” Slay said. “Even if I want to go against the best, if he feels like this is what’s best for the team, I’ll do it. At the end of the day, I’m out there to do a job and do it at the highest level.”