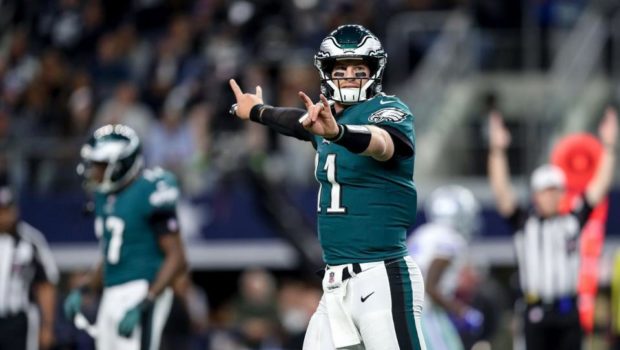 CAN EAGLES RUN THE TABLE? SEAHAWKS, RAMS WILL TELL THE TALE!

The Eagles, by record and by appearance, have been the best team in the NFL this season. They are 10-1, and in the entirety of November no opponent came within three touchdowns of them. But we may not know how good they are yet, and the next two weeks will provide the fullest reveal of their capacity.

The juggernaut Eagles spent Sunday performing elaborate group celebrations, boosting Carson Wentz’s MVP candidacy and making Mitchell Trubisky regret the advent of football. They destroying opponents and outwardly enjoying the hell out of it. What they have not done, through no fault of their own, is defeat many good teams.

The Eagles have beaten only one team that currently owns a winning record, which came when they downed the Panthers, 28-23, in Week 6. Their only other game against an opponent presently above .500 came in Week 2 at Kansas City, a 27-10 loss.

It’s not the Eagles’ fault their schedule turned out to be breezy so far, and they have mostly throttled opponents. But they will face their toughest tests of the season in the next two weeks. They’ll play at 7-4 Seattle on Sunday, and after spending the week in Los Angeles, they’ll face the 8-3 Rams on the road. The Eagles have already proven they’re excellent, but we’ll find out more about them in the next two weeks: