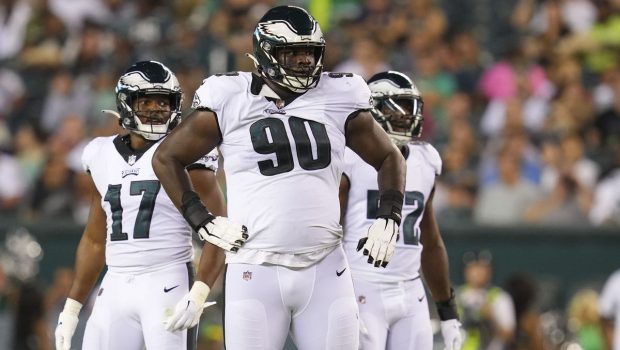 Jordan Davis is the talk of Eagles camp, what with his size and athleticism.

At 6-6, 340 pounds, the rook defensive tackle from Georgia has lit up the Internet with a viral video standing up fellow rook Cam Jurgens.

And even vet observers like Brian Baldinger are swooning.

After a great preseason game against the Jets, the hype for the Eagles nose tackle seems to be peaking.

And Davis’ overall camp performance has been fantastic.

But the Eagles already had a talented defensive line and will be switching between four-man and three-man fronts throughout the season, limiting Davis’ initial participation.

Jordan Davis. Keep an eye out, and I’m already…and I know my Michigan man (the Lions’ Aidan Hutchinson) and Jordan Davis’ [Georgia teammate] that was drafted first overall (the Jaguar’s Travon Walker) will be pegged as defensive player of the year candidates. Do not sleep on Jordan Davis, who is creating major problems and wreaking havoc. I like the Philadelphia Eagles.” [Rich Eisen Show]