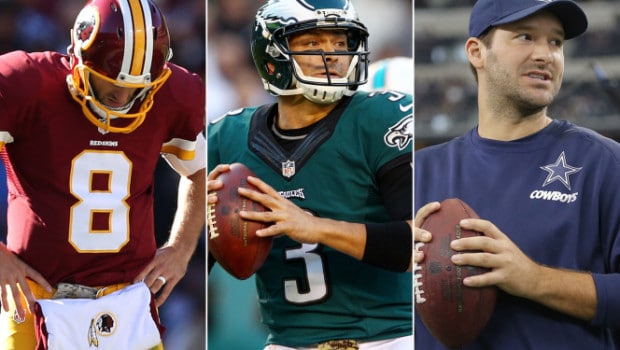 CAN EAGLES — OR ANYONE — CATCH THE GIANTS IN NFC EAST?

It’s Tuesday, Nov. 17, and the Eagle have seven games left in this season of failed dreams.

No, they are not out of the playoff hunt — the beauty of the NFL is that almost no one is mathematically out of it — but the reality is that 2015 is looking more and more like a lost season.

And that is because the NFC East-leading New York Giants have a big leg up.

True, Big Blue is only a half-game ahead of the Eagles and the Redskins, but even after letting a huge win slip through their hands Sunday in a 27-26 loss to the unbeaten Patriots, Tom Coughlin’s 5-5 team enters its bye week as the only team in the division without a losing record.

As a result, the Giants are in first place — a half-game better than the Eagles and Redskins and 2 ¹/₂ games ahead of the rapidly fading Cowboys — and still control their own destiny despite riding a roller coaster of injuries and heartbreaking finishes the first 10 games.

As well as Kirk Cousins has played lately (he threw four TD passes while compiling a perfect 158.3 rating in Sunday’s rout of the Saints), he has no track record of consistency.While the Giants are resting, Washington’s immediate task is the most difficult of all the East contenders. The Redskins must travel to Charlotte this weekend to face Cam Newton and the 9-0 Panthers.

The Redskins also have shown no ability to win away from FedEx Field this season, going 0-4 while losing by an average margin of 12 points on the road. Four of Washington’s final seven games are on the road, including trips to Philly and Dallas the final two weeks of the season.

The Eagles, meanwhile, are mired in uncertainty after possibly losing Sam Bradford to a shoulder injury and a concussion in Sunday’s embarrassing 20-19 home loss to the previously reeling Dolphins.

Mark Sanchez took over and sealed the loss by throwing an interception in the end zone — hardly a shocking development for the former Jet — in his first appearance of the season.

The Eagles will have to rely on their formidable running game if Bradford is forced to miss significant playing time, because a finishing kick that includes match-ups with the 9-0 Patriots, 5-4 Bills and 7-2 Patriots looks daunting with the turnover-prone Sanchez under center.

With Tony Romo set to return this week against the Dolphins, the Cowboys could still play themselves back into contention. Dallas has almost no margin for error, but 8-8 or even 7-9 could still be enough to win the East, and the Cowboys still have plenty of pieces from a team that went 12-4 as recently as last season.The Cowboys appear reduced to a spoiler role after losing their first seven games after Romo suffered a broken clavicle, but the Giants still can’t sleep on Dallas.

Even so, the Giants can still feel optimistic about their current top-dog status in the division.

“We’re 5-5, [but] we’re on top [of the East],” Reese said. “The division is going to come down to a couple games at the end probably, and we want to be one of the teams in the conversation at the end.”

With the rest of the division so shaky, it looks like only a collapse by his own team will keep Reese’s wish from happening.