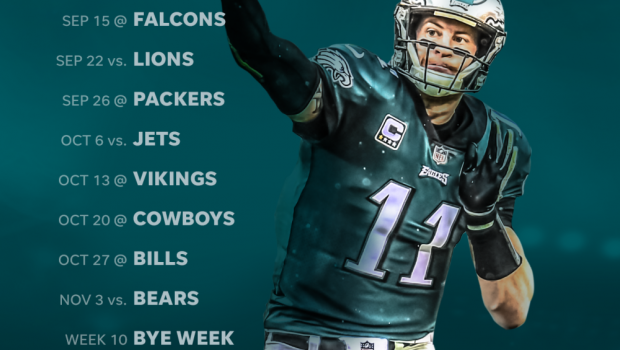 CAN EAGLES GET THEIR ACT TOGETHER TONIGHT IN LAMBEAU?

Vast swaths of Eagles Nation have written off the Birds after their 1-2 start.

Vegas sports books have joined in too.

But here’s an against the grain view of their plight from none other than NFL.com’s Marc Sessler:

Philly hung around in back-to-back outings that saw injuries tear through the roster. Starting wideouts DeSean Jackson and Alshon Jeffery played a combined 17 snaps against the Falcons before sitting out the Lions loss. Stalwart left tackle Jason Peters was in and out of Sunday’s lineup with an illness, while his backup, rookie Andre Dillard, suffered a knee injury five snaps in. On defense, the Eagles toiled without behemoths Timmy Jernigan (projected to be out a month) and Malik Jackson (on injured reserve) before losing cover man Ronald Darby midgame.

Cleaner play is a must. Wentz was undermined by a rash of drops, while up-and-down target Nelson Agholor lost a costly fumble in Lions territory, taking the shine off his two-score afternoon. Rookie runner Miles Sanders fumbled twice on one drive, with the second flub awakening an angry flock of boo-birds at the Linc.

I belonged to the offseason crowd that saw Philly as the franchise to beat in the NFC. Powered by a top-three front office and a Super Bowl-winning coaching staff, the Eagles have worked themselves out of multiple jams. Beyond the Nick Foles-led Super Bowl ride in 2017, Philly overcame one injury after another last season — and a 4-6 record at one stage — to journey within a touchdown of the NFC title game. That resiliency resonates, because so many of the same people remain inside the building.

Still, it might get uglier before it grows prettier.

The Eagles find themselves two games behind the Cowboys in the NFC East, with a tough ask in the hopper: A Thursday night clash in Lambeau against a surging Packers defense allowing 11.7 points per game with a league-high eight takeaways through three undefeated weeks. If Green Bay’s offense hasn’t exactly exploded under first-year coach Matt LaFleur, Aaron Rodgers came out of Sunday’s win over Denver without taking a sack all game from a Broncos unit fronted by Von Miller and Bradley Chubb. Philly’s defense knows the feeling after failing to drop Detroit’s Matthew Stafford to the turf.

A 1-3 start feels realistic through the joyless lens of cold logic. Anarchist types would vibe off it, too, as Philly’s talk radio outlets would morph into a verbal gabfest bent on civic destruction come Friday morning.

NFL Network “Thursday Night Football” host Colleen Wolfe comes from a long line of Eagles fans and remains suspicious, telling me Monday: “The team’s banged up, but that’s not an excuse for drops, fumbles and penalties. Wentz is doing everything he can to win … They need to clean up their act quick.”