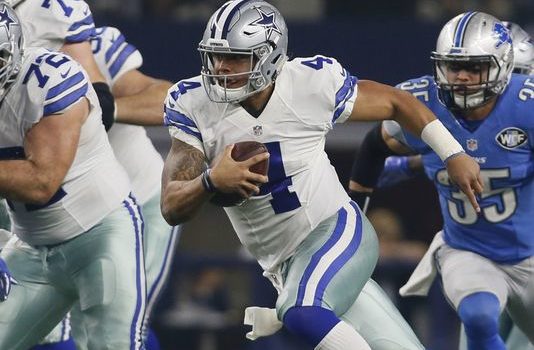 CAN ANYONE STOP THE DREADED COWBOYS’ SUPER BOWL EXPRESS?

The Cowboys are stampeding to the Super Bowl, or so it seems.

Dallas’ rookie combo ripped through yet another defense, with quarterback Dak Prescott (above) passing for 212 yards and three touchdowns and running back Ezekiel Elliott rushing for 80 yards and two scores. The 13 wins credited to Prescott tied Ben Roethlisberger’s rookie record.

Receiver Dez Bryant caught two touchdowns from Prescott and throwing one of his own to tight end Jason Witten.

The Cowboys defense was also key in coming back from a seven-point deficit.

After allowing the Lions to score touchdowns on their first three drives of the game, Dallas tightened up its coverage on the outside, pressured quarterback Matthew Stafford relentlessly and clamped down on the Detroit offense the rest of the way.

With the victory, Dallas merely padded its record, having already clinched the NFC East and home-field advantage throughout the postseason.

Meanwhile, the Lions (9-6) must now beat the red-hot Green Bay Packers in the regular-season finale in what is essentially an NFC North championship game. The loser of that game would find itself outside the playoffs if the Washington Redskins (8-6-1) win their final game. The Tampa Bay Buccaneers also remain mathematically alive but must win and have several games break their way to jump over the Redskins and Packers (9-6).