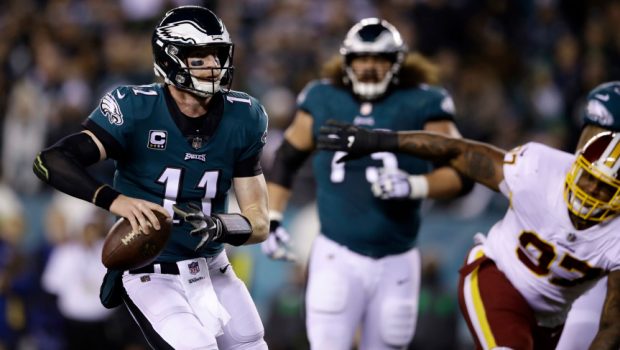 CAMP IS MORE THAN 2 MONTHS AWAY, HERE ARE EAGLES STARTERS!

It’s only May 14, and training camp is more than two months away.

But here’s our stab at the Eagles starting line-up:

And here’s what NFL.com thinks:

» Jordan Howard might start the offseason with a slight lead for the Week 1 starting job, but Miles Sanders’ complete game gives him an advantage in the long run. Sanders is easier to keep on the field in any formation. Corey Clement, Josh Adams and Wendell Smallwood will be in a battle for snaps behind them.

» Nate Sudfeld is one snap away from being the Eagles’ starting quarterback. I don’t think that sounds as scary to Eagles brass as it does to the general public. Sudfeld has shown a lot of potential in practice and preseason work.

» After choosing to retain Nelson Agholor, this is a deep wideout group. Alshon Jeffery, DeSean Jackson and Agholor have such different skill sets that complement one another well.

» It’s quite possible backup Dallas Goedert is a top-12 tight end in the league already, yet he’s not listed above. I expect he’ll get a similar amount of snaps to Agholor and D-Jax, while rookie wideout J.J. Arcega-Whiteside also figures to get some run.

» The health of left tackle Jason Peters and right guard Brandon Brooks is something to watch all offseason. Brooks is coming off a torn Achilles tendon.

» The team’s impressive defensive line will look even better if Chris Long plays another season, but the return of Vinny Curry and Tim Jernigan gives the team decent depth inside and out. Malik Jackson is an upgrade at defensive tackle.

» This is a boom-or-bust secondary. Ronald Darby, Jalen Mills and Rodney McLeod are all coming off significant injuries. Avonte Maddox and third-year cornerback Sidney Jones have high ceilings, but the group as a whole is a mystery.

Biggest change from a year ago: Carson Wentz gets his first healthy offseason as The Man with a deep skill-position group around him.