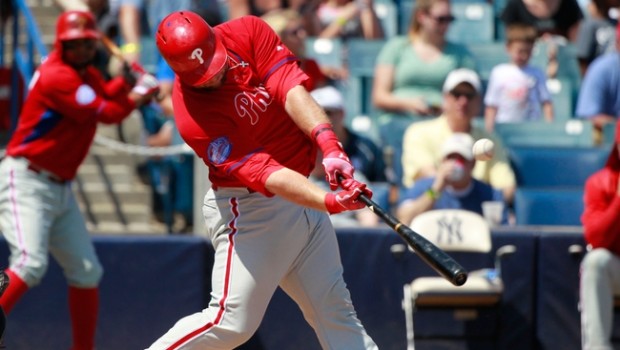 The Phillies got a close look at a prospect they are trying to pry from the Red Sox in exchange for Cole Hamels.

And they also were pleased by their own back-up catcher’s performance.

From an inside-the-park home run by Mookie Betts to a three-run rocket off the bat of Hanley Ramirez, the Red Sox were clicking throughout the lineup in Sunday’s 7-6 victory over the Phillies at JetBlue Park.

Ramirez went 2-for-3 with five RBIs after coming into the game with a .208 average.

Betts continued his magnificent spring by going 2-for-2 to raise his average to .471.

For the Phillies, catcher Cameron Rupp continued his impressive spring training by going 2-for-3 with two doubles, raising his average to .412.

“For me, he’s a guy that when he makes contact, some good things can happen because he’s so strong,” Phillies manager Ryne Sandberg said about Rupp. “He’s really had good at-bats putting the ball in play, and that’s resulted in some extra-base hits. It’s something he’s working on and he’s shortening up his stroke a little bit, with kind of the team philosophy of the camp, and he’s taken to that.”

Knuckleballer Steven Wright, who is probably Boston’s top depth option if one of the projected starters gets hurt, had a strong outing. The righty allowed two hits over four scoreless innings, walking two and striking out two.

“It was nice to be out there and throw some good strikes,” said Wright. “For me, I was just trying to command the strike zone. I felt like I did. I lost it a little bit in that fourth inning, but was able to get through it.”

Phillies righty Jerome Williams, who missed his last start with hamstring tightness, was rocked for 10 hits and five runs (four earned) over three innings in his return.

“It was a good lineup out there,” said Williams. “I just wanted to get my work in, get back on that mound and see how everything feels. It was rough. The quality of the pitches wasn’t quite there, [everything] pretty much up in the zone. But overall, I think it was a good test for my hamstring and my body to be out there pitching.”

The toughest inning for Williams was the third, which Betts opened with the inside-the-parker that center fielder Odubel Herrera didn’t get a good jump on. Three batters later, Ramirez unloaded for his three-run homer, his first of the spring.