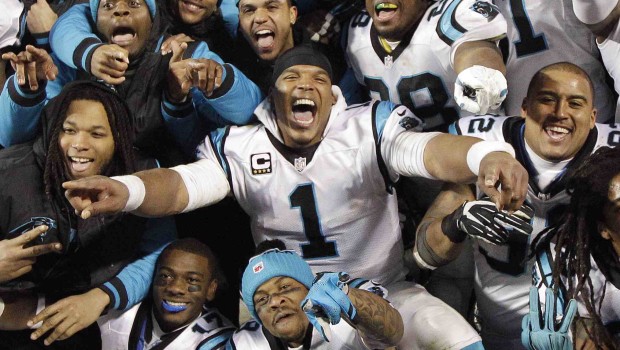 CAM THE MAN TAKES PANTHERS TO THE PROMISED LAND!

And this one play is an example:

With the third quarter ticking away and Carolina facing third-and-10 in Arizona territory, Newton took the snap, tucked the ball and barreled off the right tackle for an 11-yard rumble that saw him shred safety Chris Clemons with an unwavering stiff arm.

One play later, Newton did it again, carrying the ball through a flock of lost Cardinals for a 12-yard score, one of Cam’s four touchdowns in yesterday’s 49-15 NFC title game romp over Arizona.

After nearly squandering a 31-0 halftime lead against the Seahawks last week, Newton’s Panthers never let up on Sunday, hammering Arizona’s defense for 476 total yards and 25 second-half points. This came after Newton took it upon himself to address his teammates at the half. So, what did he say?

“It’s confidential, but it worked,” Newton told FOX after the game. “I don’t want the credit. … We won as a team.”

Still, Carolina’s magical campaign begins and ends with Newton, who ran for a pair of touchdowns and threw for two more after entering Sunday with 22 touchdowns and just one pick over his previous nine starts.

Assuming he nabs MVP honors — and expect a revolt if he doesn’t — Newton is one win away from becoming the first quarterback in NFL history to win the Heisman Trophy, the National Championship, the MVP award and the Super Bowl.

It helps that his Cardinals counterpart, Carson Palmer, melted down in epic fashion with four picks and a pair of fumbles, but Newton handled his business from wire-to-wire with seven scoring drives against Arizona’s typically rugged defense.

Unlike Kaepernick and Cutler, though, Newton’s stock continues to rise with one money performance after the next. He’s grown as a quarterback — and even more as a leader — but Cam on Sunday dismissed the personal accolades to talk about what comes next.