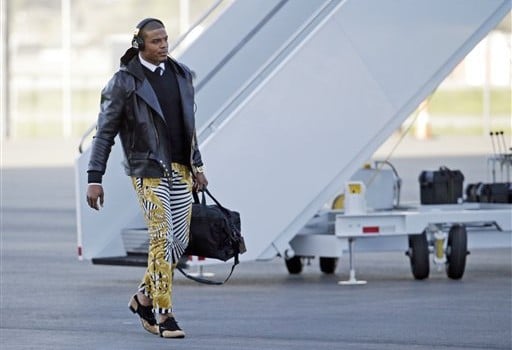 CAM NEWTON: A PANTHER WHO IS MAKING ZEBRA PANTS FASHIONABLE!

As quarterback of the 15-1 Carolina Panthers who square off tomorrow night against the Denver Broncos in the Super Bowl, Cam Newton is already a big name in football.

But fashion experts say he might become one in the style world as well. And not just because a North Carolina city is giving out awards for the best “Cam Pants” at a Panthers rally.

Newton’s appeal lies beyond the eye-popping accessories at the exorbitant prices, though. He has made an imprint by pairing the wilder elements of his wardrobe with conservative elements as well. The zebra pants, designed by Versace (above), were paired with a dark sweater and tie.

“By taking the zebra pants and then toning it down with a sweater and jacket, that shows he knows how to wear fashion, right there,” says stylist and fashion expert Dawn Del Russo.

Del Russo, who was largely unfamiliar with Newton before looking over his wardrobe choices this week, says the combinations he wears make him stand out even more than he otherwise would. The poofball hat ($360), which is geared towards women, was matched with a black coat and an understated tie. He blended the foxtail with jeans. “You’re going to make me follow this guy on Instagram,” Del Russo joked.

“I look at someone like Cam,” says Zee, “and what’s worked for athletes in the past is that fine line between good taste and over-the-top vulgar. There is something quite daring and bold about his sartorial choices. There is a coolness about it. I do think it works on Cam.”

The combination of daring and traditional will allow him to have a bigger impact, says Del Russo. Many male sports fans will shy away from the zanier outfits they see on TV (hello, Russell Westbrook) because it seems like too much of a stretch for the office worker or the suburban dad. Newton has one foot in what’s expected and one in what’s outlandish, and that helps him speak to more people.

“Guys might not wear zebra pants, but maybe they’ll add stripes,” she says. “That’s what fashion is meant to do. [Cam] can get away with it; he can go out there and wear something more crazy, but it gives ideas and makes it creative about how outfits are done.”

Whether on purpose or by coincidence, Newton’s fashion sense mirrors his playing style. In this MVP-caliber season, he’s mastered the blend of the old-school pocket passer with the new-school mobile quarterback. He is an example of how it’s always been done and how it hasn’t always been done, and that comes through in what he wears.

“I would not be surprised at all if he attempted a fashion line,” says Del Russo. “A conservative style with a really chic edge.”

Critics say it’s all part of Newton’s desire for attention, but in the fashion world, that’s expected and welcomed. In fact, his acting out in sixth grade led to a punishment that started all this: his dad made him wear a suit and tie to school. Newton not only embraced it, but soon other kids were following his lead. He was developing a following even then.

“He always had a strong will to self-identify who he is and appreciate his person,” his father, Cecil, told Sports Illustrated for Kids. “He never cared whether people enjoyed or appreciated that or not. He was who he was.”

That could turn some sports fans off, yet it adds to Newton’s authenticity for those who are watching his style. It fits, literally.

And it’s caused more than a small stir at a store in Atlanta. Though Towns wants to clear something up.

“Cam didn’t start the trend,” he says. “We started the trend.”