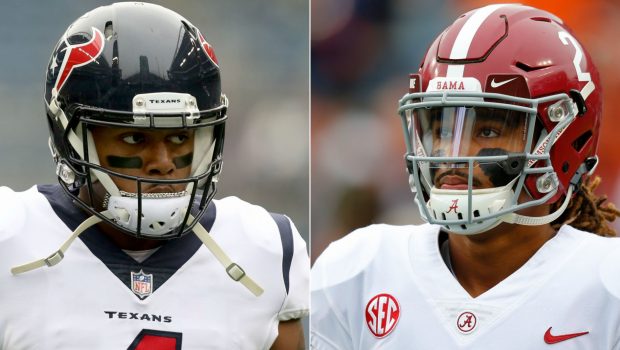 CALM DOWN, EAGLES WHINERS: HERE’S WHY THEY TOOK JALEN HURTS!

I was talking to one of Jalen Hurts’s old coaches the other day, and he basically said that what gives Hurts a real shot in the NFL is his competitiveness, which this coach believes will drive him to keep the improvement he experienced in 2019 at Oklahoma going.

And as we talked, I mentioned how good I remember Hurts being at the end of the 2016 national title game against Clemson, one that he and Alabama lost, but also one in which, as an 18-year-old true freshman, he went toe-to-toe with Deshaun Watson.

And so I decided to go back and watch the last five minutes of that game. Watson, as we all know, was awesome. But so too was Hurts, who seemed completely unaffected by the circumstances or his own inexperience. His last snap in that one was a 30-yard touchdown run to put the Tide up 31-28 with 2:31 to go. A year later, he’d lose his job to Tua Tagovailoa in the title game—but that was after losing offensive coordinator Steve Sarkisian, who’d been key in his development. I’ll be intrigued to see what Doug Pederson can do with him in Philly. Also, if you have time, re-watch that Alabama-Clemson finish. I promise it’s worth your time.