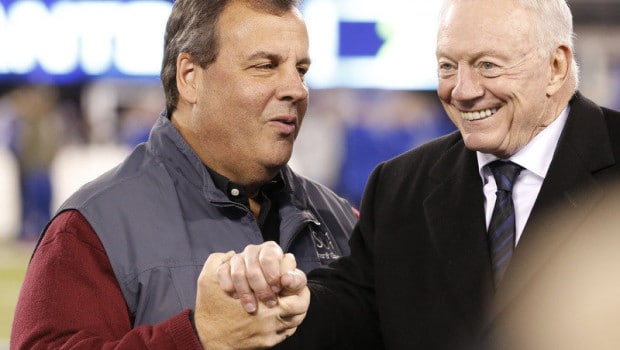 Jerry Jones (right with Christie), who owns the world’s most valuable sports franchise in the $4 billion Cowboys, also holds a personal stake in DraftKings, a $1.2 billion venture that’s become one of the largest daily fantasy sports contest providers in the nation.

NFL teams are not permitted to invest in the daily fantasy betting companies, but their owners are. A spokeswoman for DraftKings declined to categorize Jones’ stake in DraftKings, saying it does not discuss its financing. However in an interview with ESPN last month, Jones said he wasn’t involved in a day-to-day capacity.

An examination of federal election filings by NJ Advance Media shows that Jones and his wife, their children, in-laws, grandchildren, as well as several current and former senior employees of the NFL franchise all donated the maximum $2,700 allowed by law for a combined $40,500 to Christie’s presidential campaign.

On Sept. 23, Jerry and Eugenia “Gene” Jones also hosted a $1,000 a head fundraiser for Christie’s presidential campaign at their Dallas mansion.

The governor had drawn criticism earlier this year for accepting tens of thousands of dollars worth of private jet flights and luxury sky box tickets for himself and his family to Cowboys games because Jones is also a part-owner of Legends, a concessions business contracted with the Port Authority of New York and New Jersey’s One World Trade center. ‘

In the Oct 28 presidential debate, Christie scored big when mocking a question about the regulation of fantasy sports businesses.