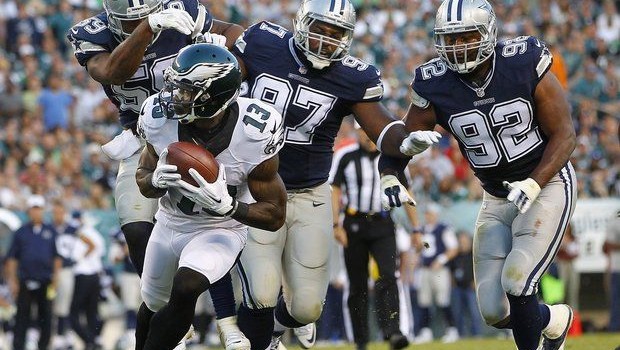 So, yesterday the press covering the Eagles was running around with its hair on fire because of what receiver Josh Huff told Birds 24/7:

That he believed the Dallas Cowboys knew what the Eagles were doing on offense in the Eagles’ 20-10 loss on Sunday.

Of course that meant coach Chip Kelly’s offensive schemes were well known to the rest of the league.

Today Huff clarified what he said.

“You all are blowing things out of proportion,” Huff said. “Point, blank, period.”

Kelly said prior to practice today that Huff conveyed to him that he didn’t hear the Cowboys’ players yelling out the plays.

When asked if he had walked back his comments, Huff wasn’t convincing with his answer.

“If he told you that, than that’s what it is,” Huff said.

But there was more.

Asked if he feels defenses can anticipate what the Eagles are doing on offense more than other teams, Huff wasn’t ready to go that far.

The Eagles’ offense has gotten off to a slow start, averaging 17 points, which ranks 28th in the NFL, and 312.5 yards per game, which is 25th in the league.