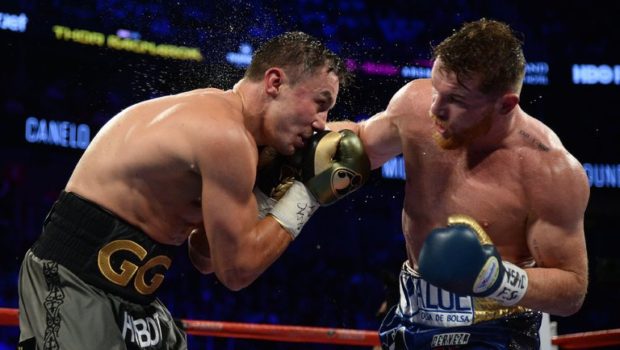 CALL IT A DRAW! GGG RETAINS BELTS AFTER BATTLE WITH CANELO!

Call it the Draw in the Desert!

Gennady Golovkin retained his middleweight titles last night in Las Vegas — a draw with Canelo Alvarez in a brutal battle that ended with both fighters with their hands aloft in victory.

The middleweight showdown lived up to its hype as the two fighters traded huge punches and went after each other for 12 rounds. Neither fighter was down and neither appeared seriously hurt, but both landed some huge punches to the head that had the crowd screaming in excitement.

Golovkin was the aggressor throughout and landed punches that had put other fighters to the canvas. But he couldn’t put down Alvarez. The two were still brawling as the final seconds ticked down and the fight went to the scorecards.

Alvarez was leading after the first three rounds, and then Golovkin dominated the middle rounds. After a pep talk from his corner, Alvarez came out more aggressive in the 10th round and won the last three rounds on all the judges’ scorecards.

Golovkin, a 35-year-old Olympian from Kazakhstan, retained his middleweight titles with the draw. But Alvarez, a 27-year-old Mexican star, showed that he could take Golovkin’s punches and land telling power shots of his own.

The draw was the first mark on Golovkin’s record, which now stands at 37-0-1. Alvarez is now 49-1-2, his only loss having come against Floyd Mayweather Jr.

A crowd of 22,358 at the T-Mobile Arena roared throughout the fight as the two middleweights put on the kind of show that boxing purists had anticipated. They brawled, used sharp jabs and counterpunched at times, with neither one willing to give the other much ground.

“Congratulations all my friends from Mexico,” Golovkin said. “I want a true fight. I want a big drama show.”

There was plenty of drama late in the fight as Alvarez seemed to rally and rocked Golovkin with uppercuts and big right hands. But just as soon as he landed, he often took one back from the slugger, who is so feared that most other fighters avoided him.

Both fighters raised their hands in triumph at the final bell and jumped into the arms of corner men. Then they waited as the scorecards were added up to see who would leave the ring with the belts.

“It’s not my fault,” Golovkin said. “I put pressure on every round.”

Golovkin predicted before the fight that the late rounds would resemble a street fight, and in a way they did. Both fighters were willing to trade, and both had no problem landing hard shots to the head.

Golovkin had chased Alvarez for nearly two years, trying to get the signature fight that would pay him millions and make him a pay-per-view draw on his own. Alvarez finally agreed to the match after Golovkin looked vulnerable earlier this year against Daniel Jacobs, in a decision win that stopped his knockout streak at 23 fights. 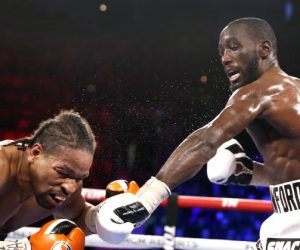 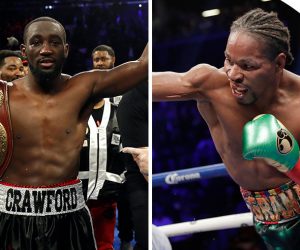 TERENCE CRAWFORD’S BACK, AND HE’S FAVE VS. SHAWN PORTER! 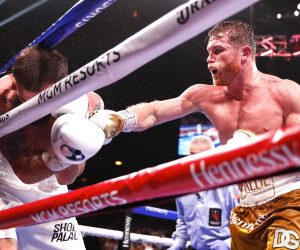