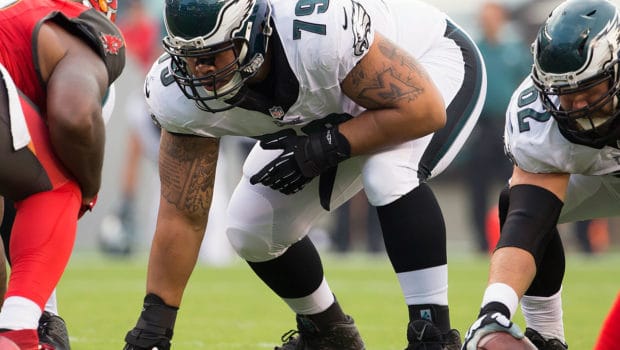 CALL AN AMBULANCE! EAGLES’ RG BRANDON BROOKS IN THE HOSPITAL

For the Eagles’ already depleted offensive line, the hits just keep on comin’!

Right guard Brandon Brooks was hospitalized with an illness, and he missed last night’s 27-13 loss to the Green Bay Packers.

Halapoulivaati Vaitai, who took over at right tackle when Lane Johnson was suspended earlier this season, suffered an MCL sprain against the Seattle Seahawks last week and did not play last night.. Allen Barbre moved from left guard to right tackle for the Packers game, with Stefen Wisniewski taking his spot at left guard.

Brooks has been one of the team’s more consistent offensive linemen this season. The former Houston Texan signed a five-year, $40 million contract to join the Eagles via free agency this offseason, and the move helped solidify a guard position that gave them considerable trouble in 2015.

With Brooks out, quarterback Carson Wentz operated behind a line missing two of its original members, with a third, Barbre, playing out of his intended position. Wentz was sacked four times.