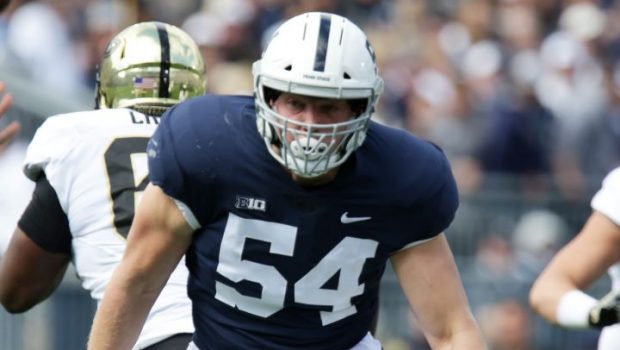 CAIN WAS ABLE, DEFENSE WAS STIFF, PENN STATE ROLLS TO 6-0!

Penn State won the turnover battle and converted on third downs to survive yet another tough trip to Iowa and advance in their quest to make the College Football Playoff.

Noah Cain ran for a 5-yard touchdown with 5:17 left and the 10th-ranked Nits held off the 17th-ranked Hawkeyes 17-12, its first win over a ranked opponent this season.

“This is a team. You’re going to have to earn it,” Penn State coach James Franklin said about the Hawkeyes. “The defense has been great all year. We leaned on them heavily.”

A matchup between two of the nation’s top defenses turned when Iowa’s Nate Stanley threw an interception near midfield with 9:22 remaining. Penn State drove 35 yards, and the last of three straight runs by Cain made it 17-6.

The Nittany Lions gained just 294 yards. But they were 10 of 19 on third downs against a defense ranked fourth in scoring defense entering play, and they scored 10 points off of two Iowa miscues.

“We grinded it out,” Franklin said.

Iowa pulled within 17-12 when Stanley found Brandon Smith for a 33-yard TD pass with 2:31 to go. The Hawkeyes’ two-point try failed though, and Cain converted a crucial third down that ensured that Iowa never saw the ball again.

The Hawkeyes have dropped back-to-back games by just 12 points after its first 4-0 start since 2015.

Up 7-6 late in the third quarter, Penn State recovered a fumble at Iowa’s 16 and Sean Clifford connected on an apparent touchdown pass to Pat Freiermuth that was overturned on review. Iowa then held the Nittany Lions at the 1-foot line, and two straight holding calls forced them to settle for a 33-yard field goal.

KJ Hamler caught seven passes, including an acrobatic 22-yarder for a TD, for Penn State.

Stanley threw for 286 yards, but the Hawkeyes ran for just 70 yards on 30 attempts.