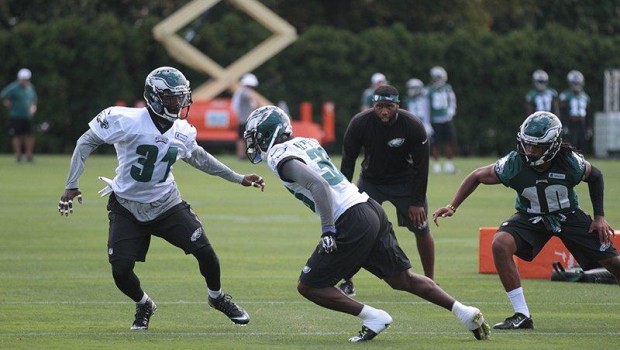 BYRON MAXWELL STEPPING UP AS LEADER IN EAGLE SECONDARY

“Maxwell’s been as good as suspected,” said Eagles linebacker Connor Barwin. “You can tell he was on a Super Bowl team and played with a very, very good group over there.”

That Maxwell (No. 31 in photo above) did, but he did not have to be the leader of that group. He was the quiet one behind Richard Sherman, Kam Chancellor and Earl Thomas.

Now, Maxwell is in a situation in which he must be the leader, and he’s embracing that role. Following the Eagles’ trading nickel corner Brandon Boykinto Pittsburgh on the eve of training camp, Maxwell likely will have to help break in rookie JaCorey Shepherd, who could start at nickel, while also mentoring rookie Eric Rowe, whom the Eagles have said will play on the outside.