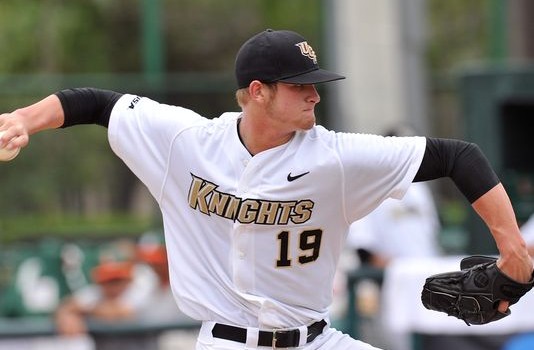 PHILLIES FINALLY SEND BYRD TO REDS FOR A ‘LIVELY’ ARM

The Phillies were finally able to get the Cincinnati Reds to take Marlon Byrd on Wednesday, but as usual general manager Ruben Amaro Jr. had to sweeten the deal with cash to get it done.

Byrd was dealt to the Reds for pitcher Ben Lively (photo above), whose soon to be 23-year-old arm better live up to his name. Byrd is owed $8 million in the final year of his contract and is coming off a season in which he hit .264 with 25 homers and a .757 OPS in 154 games. His plate discipline and defense has degraded tremendously, however.

Lively turns 23 in March. He was a fourth round pick of the Reds in 2013 out of the University of Central Florida. He’s 13-11 with a 2.58 ERA in 39 starts across two minor league seasons. He’s not a top prospect — he walks a tad too many batters — but he does have the potential to be a mid-level big league starter.

The Cincinnati Reds found their left fielder, and it’s someone they passed on two years ago — Marlon Byrd.

The team has traded right-handed pitching prospect Ben Lively to the Phillies in exchange for the 37-year-old Byrd.

Byrd was acquired by the Pirates after the non-waiver trade deadline in 2014 and the Reds could have blocked the trade by claiming him, but did not. He went 2 for 4 with a home run against the Reds in the Pirates’ Wild Card Game over the Reds in 2013.

Byrd fills a void the Reds pondered filling via free agency, but the cost for outfielders such as Melky Cabrera soon grew prohibitive. Former Kansas City Royal Nori Aoki was perhaps the next best fit on the market before the Reds swung the deal for Byrd.