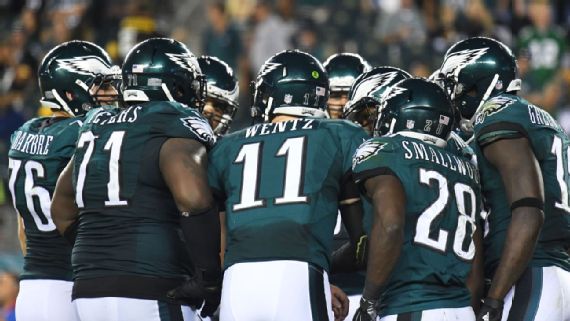 Don’t get carried away, Eagles Nation!

The last time the Eagles started 3-0 they didn’t make the playoffs:.

Chip Kelly’s Eagles began the 2014 season, 3-0, finished 10-6 and missed the playoffs when they lost three of their last four games at the end of the season.

This is the ninth time in the Eagles 84-year history they have started a season 3-0. How did they do after that quick start?

As head coach Doug Pederson stressed both immediately after Sunday’s 34-3 win over the Pittsburgh Steelers and again at his Monday press conference “it’s a long season.”

“I think it’s the number-one challenge for all of us,” Pederson said about keeping focus. “I speak for myself too when I say that we’ve got to stay humble through this whole thing. The season is very young, only three games in. A lot of football left, as you know. We just take them one at a time.

“I’ve learned over my career as a player, as a coach at this level, 22 years in the National Football League, you’ve seen a lot of ball. You have been on teams that have started fast; you have been on teams that have started slow. It’s just how you stay the course. You can’t substitute preparation, hard work for anything. If we just stay the course and the guys prepare the way they’ve prepared each week, then we’ll see what happens on Sundays. But so far it’s been great.”

And so have the Eagles through three games. They have outscored the opposition, by an amazing 92-27. After this week’s bye, however, they go from a “surprise” team to a contender. They’re no longer hunting, they’re being hunted.

“The biggest thing is complacency,” Pederson said. “You think you’ve arrived. You think you are all that. When that creeps in, that’s when you get beat. It’s my job not to let that creep in. I’ve got to keep the guys focused and grounded. I told them this week they’re going to travel and go home and people are going to pat them on the back and say how great they are. But next Monday, I’m going to tell them, ‘Hey, we’re back to work. We’re zero and zero. This is game one and let’s go.’

“That’s just the way it has to be. You are building for one ultimate goal and that’s a few weeks down the road. That’s what you are trying to get to. But you can’t get there unless you take care of the next opponent. It’s my job to keep them focused that way.”