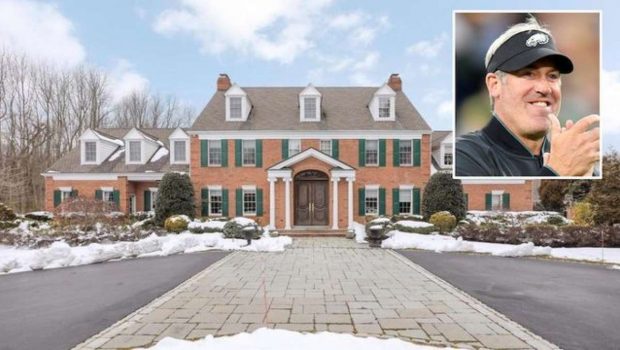 The Colonial-style estate is now available for a hair under $2.7 million. Fired by the team just three years after a miraculous Super Bowl win, Pederson is ready for a fresh start.

The Jersey suburbs are a popular area for Eagles players and coaches to land, as they offer privacy and an easy 15-minute commute to Center City.

Set on nearly 3.28 acres, the stately, custom-built home from 1985 offers five bedrooms, five full bathrooms, and two half-bathrooms. Highlights of the 6,918-square-foot interior include a two-story entrance with curved staircase.

The home flows to a family room with two TVs and an oversized fireplace, as well as formal living and dining rooms. The gourmet kitchen is equipped with two Sub-Zero fridges, two dishwashers, granite counters, and a butler’s pantry.

The finished basement offers a gym that looks as if it’s ready for an entire team to work out in. The lower level also includes a temperature-controlled wine room, full bathroom, lounge area, and a media and game room, currently decorated with sports memorabilia.

Outside, the backyard is set up for summer, with a pool, bluestone patio, outdoor stone fireplace, wet bar and barbecue area, and hot tub. A separate two-car garage, storage area, golf simulator, and unfinished loft space complete the property.

Before his coaching career, Pederson was a quarterback in the NFL for multiple teams from 1991 to 2004, including the Green Bay Packers squad that won Super Bowl XXXI. When he was head coach of the Eagles, the long-shot team won the Super Bowl in 2018, making Pederson one of the few people who have won Super Bowls both as player and as coach.