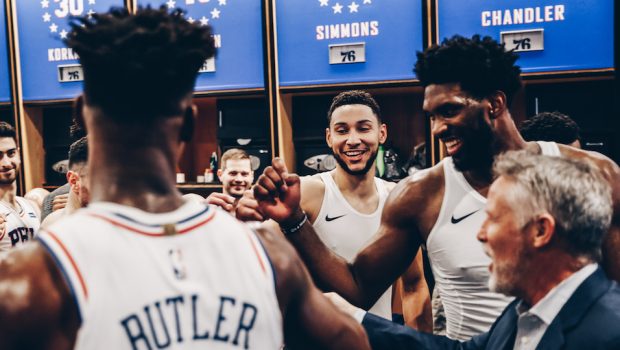 BUTLER, SIMMONS RING BELL AS SIXERS GRIND DOWN THE GRIZ!

Jimmy Butler scored 13 of his 21 points in the fourth quarter to lead the 76ers to a 103-95 victory over the Memphis Grizzlies.

Butler hit winning shots against Charlotte and Brooklyn in eight days to quickly earn a reputation as Philly’s newest go-to guard in the fourth. Against a Memphis team trying to steal one on the road, Butler hit a few more big buckets in the waning moments.

Butler didn’t need the final-minute theatrics to win this one. But he proved his worth and stunted Memphis’ rally.

Ben Simmons, who had 19 points and 12 rebounds on a sprained left ankle, ran up from behind on MarShon Brooks and poked the ball free for a steal. That led to a pair of free throws for Butler that made it 95-89. Butler buried a turnaround jumper for a 97-89 lead that sealed the win.

“That’s what the team needs me to do late, close out a couple of games,” Butler said. “It didn’t come down to the buzzer-beater thing. I think all in all in the fourth quarter, I scored a few points.”

JJ Redick continued his late-career resurgence with 24 points for the Sixers and Embiid had 15 points and 14 rebounds.

They all admire the way Butler has acclimated himself since his arrival last month in a trade with Minnesota. The Sixers are 13-1 at home and 8-2 since the Butler deal.

“Jimmy’s an easy guy to have as a teammate,” Redick said.

Butler has tried to take Simmons under his wing and focus more on a defensive toughness. But they’ve been pretty good on offense, too Butler fed Simmons for a cutting layup in the first quarter and Simmons fed Butler

With the rest of the NBA on a run-and-shoot style of soaring scores, the Grizzlies are grinding out wins in a methodical manner. They kept within striking distance of the Sixers and pulled to 84-81 in the fourth and Marc Gasolhit a 3 to make it 92-84 before Butler pushed them back.

Mike Conley scored 21 points and Jaren Jackson Jr. had 17 for the Grizzlies.

“We’re not in panic mode at all,” Conley said. “We’ve built ourselves a good little cushion to have a little spell like this. Hopefully, we’ll just get back home, get back to work, get a few days in and get back together.”

The Sixers had thumped New York by 16 and Washington by 25 as they rolled to the second-most wins in the NBA. Embiid and Simmons had formed one of the more potent 1-2 offensive punches in the NBA. Throw in Butler’s two-way ability, and the Sixers have a newfound toughness.

“Whenever we’re leading the charge on the defensive end, everybody’s going to follow,” Butler said.