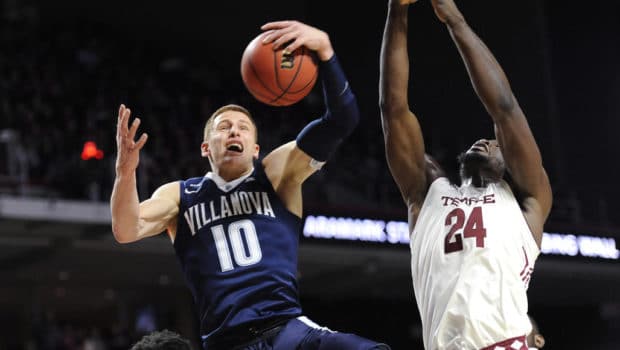 THE BUTLER DID IT! NO. 1 NOVA RETURNS TO HAUNTED HINKLE TODAY

Villanova returns today to historic Hinkle fieldhouse to play Butler, which upset the Cats a year ago, ending their 14-0 start.

Butler, 8-0 at Hinkle this season, is expecting its second sellout crowd.

“We can’t let it affect us in an emotional way,” Butler coach LaVall Jordan said. “We’ll need them. We’ll need all 9,100 of them. We’ve got to play within ourselves and not get too anxious.”

This will not be the first time Jordan has been on a coaching staff opposing Villanova. He was a Michigan assistant when Villanova beat the Wolverines 60-55 to win the Legends Classic on Nov. 26, 2014.

Jordan said Villanova resembles Wisconsin in that both are strong in fundamentals and don’t beat themselves. Others have compared Butler to Villanova for the same reasons. Not-so-coincidentally, three of Villanova’s four losses last season were to Butler and Wisconsin.

“I take that as a compliment, if we are compared to Butler’s style, Butler’s ethos,” Villanova coach Jay Wright said. “We have great respect for the Butler Way.”

On the Wildcats’ first visit to Hinkle, he said, he took a photograph of the corridor display listing elements of the Butler Way. He said “commitment to their identity” allowed the Bulldogs to beat Villanova twice last season.

What the Bulldogs have not figured out is how to avoid dreadful starts. They have fallen behind early against all six opponents from major conferences, although they came back to win three of those games.

Maybe that won’t happen at home, where Butler is shooting 54 percent and averaging 86.5 points a game. The offense will need to be that effective because Villanova is:

Epitomizing that efficiency is Jalen Brunson, the front-runner for Big East player of the year. The point guard is shooting 60 percent from the field, 52 percent on 3s, averaging 17.9 points and 5.0 assists, with a 3.9 assist/turnover ratio.

Five Wildcats average in double figures, including forward Mikal Bridges, whose 17.5 average is nearly double that of last season. Seven scored 10 or more points in Wednesday’s 103-85 win at DePaul.

“They take their time offensively and get the shot they want,” Jordan said.