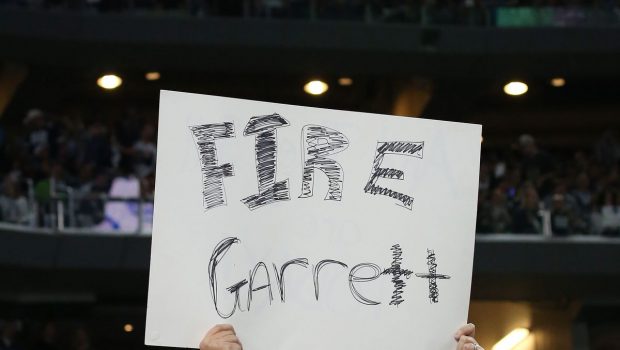 “When you’re feeling low and you’re seeing the Grim Reaper and then come in and have your team perform the way these guys did, I promise you it’s a special feeling,” owner and general manager Jerry Jones said. “I won’t need any wings on that airplane getting back to Dallas.”

If you’re looking for a silver lining after last night’s Eagles loss to the Cowboys:

At least the execrable Cowboys owner has left the Birds’ air space!

They left Philly with a win after Jason Garrett saved his job.

Dak Prescott threw two touchdown passes in a road game for the first time this season.

Ezekiel Elliott rushed for more than 150 yards against the NFL’s second-best run defense and scored twice, including on a pass.

Coordinator Scott Linehan managed the offense as well as it had been managed all year.

And the defense did just enough with Leighton Vander Esch book-ending a first-quarter interception with a huge, fourth-quarter tackle that preceded Jeff Heath’s fourth-down stop of Zach Ertz with 1:09 to play.

“I don’t know that I learned anything new (about his team),” Garrett said. “You try to build a team of guys who love football, who are mentally tough and I think those things get revealed when you have to go through some adversity of the course of the season.

“I thought they did a great job coming back after the (Tennessee) game just getting back to work, not blinking. Just going back to work and understanding the importance of what this next opponent is and playing 60 minutes. Thought we did a better job of that in this game than we have in the last few games. Dealing with the adversities of the game and keep playing. Dealing with the successes of the game and keep playing.”

At times early in the game, Prescott was bad. He held on to the ball too long, leading to sacks — including a 13-yard sack in the second quarter.

At times, Prescott was brilliant, such as at the end of the first half, when he connected on five passes for 79 yards and sneaked in from a yard out with 19 seconds left for the Cowboys’ first touchdown.

And then with 7:27 to play in a tied game, Prescott was once again brilliant with a 17-yard completion to rookie tight end Dalton Schultz, a floater to Amari Cooper for 24 yards and a critical third-and-8 completion to Allen Hurns for 23 yards. From there, the Cowboys rode Elliott, giving him the ball three straight times, leading to his second touchdown of the game.

When the Cowboys were at their best in 2016, they rode then-rookies Prescott and Elliott. Now almost grizzled veterans in their third year, Prescott was efficient Sunday, and Elliott was explosive.

Prescott completed 26 of 36 passes for 270 yards and a touchdown pass. Elliott finished with 151 yards on 19 carries with a touchdown run and touchdown reception.

“We needed it,” Elliott said. “It was absolutely mandatory that we went and got this win. We want to keep our hopes up for winning this division and making the playoffs. So we had to go out there and win.”