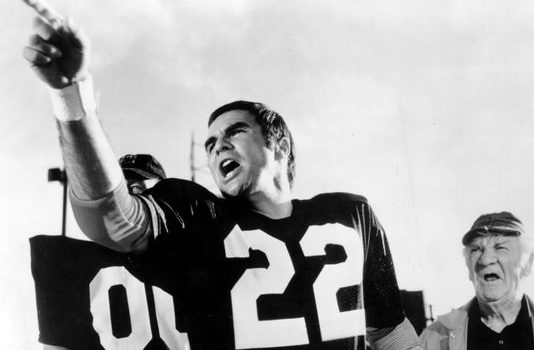 Two minutes left, 80 yards to go, game on the line. You can have Tom Brady, Drew Brees or Aaron Rodgers. Or any NFL quarterback, for that matter.

Give me Burt Reynolds.

That is, Paul Crewe, the swashbuckling quarterbackReynolds played in the 1974 movie “The Longest Yard.’’ Maybe not the right guy for a Nike ad, but definitely the right guy to spice up an NFL Sunday.

Reynold’s performance in “The Longest Yard’’ is worth remembering now, with the actor having died yesterday at 82 and the NFL gearing up for its 2018 season with plenty of stars but no one quite like Reynolds. He had charisma, star power, a legendary mustache and, at least in “The Longest Yard,” a notable rap sheet.

His fictitious character was banned from the NFL for point shaving. And after stealing his girlfriend’s Maserati-powered sports car in a move that landed him in Citrus State Prison for 18 months, Reynolds probably disqualified himself for the NFL’s Walter Payton Man of the Year Award. But awards weren’t the point.

What Reynolds captured in “The Longest Yard” is what sports does best – redemption.

Losing his dignity and freedom. Then recruiting inmates for a football team. And ultimately quarterbacking that team team to victory over a team comprised of nasty prison guards.

On the screen, Reynolds oozed authenticity. That’s because he attended Florida State on a football scholarship and played halfback. Injuries cut his career short at Florida State, but his experience made him a near-perfect fit for the “Longest Yard’’ script. How good?

For his performance in “The Longest Yard,” Reynolds was nominated for a Golden Globe but ultimately lost. Brady, Brees and Rodgers, by contrast, each have Super Bowl rings. But how would those NFL quarterbacks have fared inside prison walls with the cameras rolling?