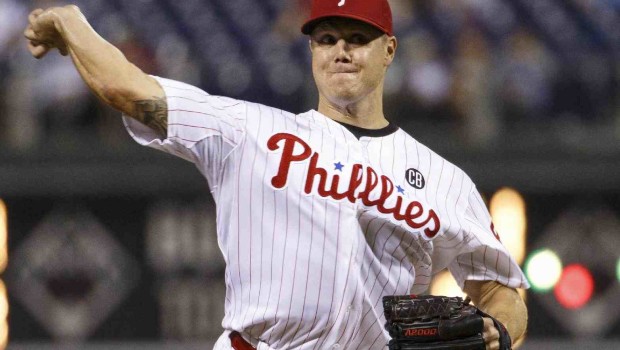 BURNETT AND PAPELBON — THE HITS JUST KEEP ON COMIN’

The Phillies’ season continued to implode with Wednesday’s 3-1 loss to the San Francisco Giants, and A. J. Burnett and Jonathan Papelbon (above photo), putatively Philly’s best bargaining chips, came up empty again.

Burnett pitched eight shutout innings – even after having to sit through a 59-minute rain delay – but left with a no-decision because Madison Bumgarner matched him for the Giants.

Then Papelbon was scored on for the second straight night when former teammate Hunter Pence blooped a 3-2 pitch down the right-field line, clearing the bases and snapping the scoreless deadlock. The Phillies closer seemed to have Pence struck out on a 2-2 pitch on the outside corner, but home plate umpire Vic Carapazza felt differently.

“A missed 2-2 pitch and a bloop hit, there ain’t nothing much I can do,” said Papelbon. “I try to go out there every day and do my best, let the hits land where they land and let the umpires call what they call.”

Papelbon blew a save on Tuesday when Buster Posey hit a game-tying homer. Before this series, Papelbon had only been scored on in two games all season. The homer Tuesday was the first he allowed this year, and he hadn’t issued a walk since May 24 before walking two – one was intentional – and hitting a batter to set up Pence’s double Wednesday.

Papelbon said he wasn’t worried about contenders souring on him over the last two outings and wasn’t stressing about potential landing spots disappearing.

“I got no control over that, and I don’t worry about things in life I have no control over,” said Papelbon. “I think if you were to put an entire season into two games, it would be pretty dumb.

“I don’t really think one thing or another. I love the bullpen I’m in right now, love the guys down there. To me it makes no difference. Whatever happens, happens. What are you going to do? I don’t really worry about it.”

Burnett continued to drive his stock up with his eighth quality start in his last nine outings, one in which he threw 131 pitches. But he preferred to keep the focus on the field and away from the rumor mill.

“All that’s out of my control,” said Burnett.

Burnett actually has some control since he has a limited no-trade clause, but he said he had no inkling whether he would remain a Phillie beyond the end of next week.