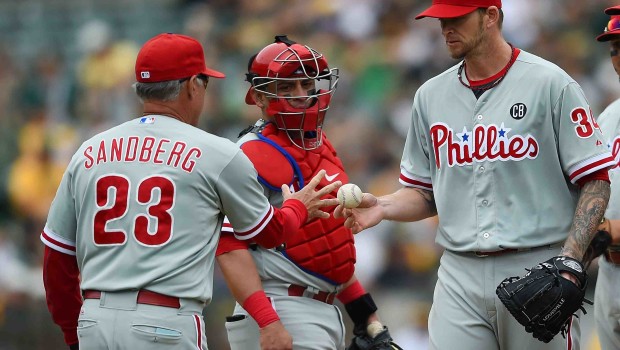 A. J. Burnett is a poster child for the awful 2014 Phillies.

And on Sunday, as the Phils lost 8-6 in 10 innings to the A’s in Oakland, he proved once again why he was a waste of $16 million the team gave him to pitch this season.

Burnett has struggled since the All-Star break, and on Sunday he matched his season high by issuing six walks, bringing his yearlong total to 93, the most in the majors. He allowed six runs on three hits while striking out three, and is now 2-9 with a 5.85 ERA in 13 second-half starts.

Despite doing an effective job of playing catch-up earlier in the game, Philly was saddled with the walk-off loss when Josh Donaldson hit a two-run homer off Miguel Gonzalez in the 10th inning to keep the A’s in the driver’s seat of the American League Wild Card race.

Ultimately, Donaldson crushed a 94-mph, belt-high fastball from Gonzalez to deep center field to notch his third walkoff homer of the year. Gonzalez said he threw the pitch where he wanted, locating it on the outside half of the plate.

As much as Burnett labored, the Phillies’ offense was able to keep him in the game, coming back to tie after falling behind three times against A’s lefty Scott Kazmir, who struck out nine but was charged with six runs on 11 hits and a walk.

“I was upset because the guys came out swinging the bat,” Burnett said. “Anytime the offense gives you runs … I don’t think I would have been as upset if I would have got hit around the yard. But to be wild like that, it’s just hard to swallow. It’s embarrassing to me, it’s embarrassing to this team. … You’d rather give up 20 hits and 20 runs than walk them on the base and give them free passes.”

After publicly contemplating retirement following the 2013 season, it could be easy to point to fatigue as a reason for the 37-year-old Burnett’s struggles. Sunday’s start marked just the third outing this year that he wasn’t able to complete the fifth, his 207 innings pitched tied for the third-highest mark of his career.

Like Burnett, Sandberg wasn’t using age or fatigue as an excuse.

“You know what, his stuff is still there,” Sandberg said. “He had six walks, two hit batsmen and four of the walks scored, so that came back to haunt him. But he was just off the plate, wasn’t able to work ahead the count. But as far as being gassed, the stuff still comes out of his hand good. The zip’s still on the ball and he still has a good breaking pitch when it’s for strikes.”

Marlon Byrd, who went 2-for-5 for three RBIs, drove in the game’s first run with a double that scored Chase Utley. After the A’s took a 3-1 lead in the bottom of the first, Byrd pulled the Phillies even in the third with a two-run double that plated two teammates.

Oakland jumped ahead, 4-3, in the third inning when Burnett walked Geovany Soto with the bases loaded. The next half-inning, Carlos Ruiz roped an RBI double to knot the game, 4-4.

Soto then gave the A’s a 6-4 advantage with a two-run double in the fifth, but Kazmir couldn’t get a shutdown inning in the sixth, as the Phillies engineered a rally to tie the game and chase him from the mound.

Given his team’s trio of comeback efforts on Sunday, it’s easy to see why Burnett was beating himself up after the game.

“I didn’t make any pitches today from the get-go,” Burnett said. “We jumped out to the lead, the shutdown inning wasn’t there. Then in the last inning I walked more guys. I just walked ’em all. It’s embarrassing.”