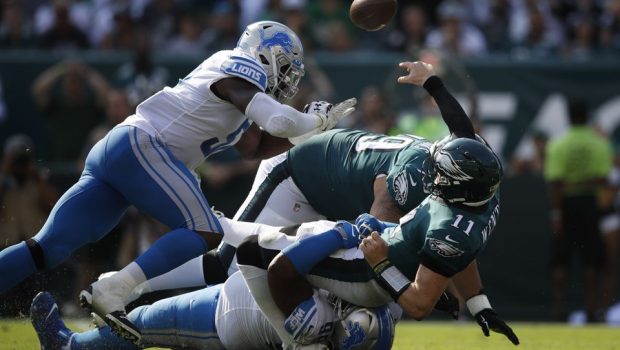 BUMBLING EAGLES CHOKE AWAY LIONS GAME, AND MAYBE THE SEASON!

The Eagles fumbled away and dropped any chances to beat the Lions at the Linc, losing 27-24 and going 1-2 with the Green Bay Packers coming up on the road Thursday night.

It’s only game 3 of the 2019 season, but the feel of this Eagles team is that they are also fumbling away and dropping any chance for the playoffs.

In the first half rookie running back Miles Sanders fumbled the ball twice on the same drive with the Lions (1-1-1) recovering the second. Detroit turned that turnover into a field goal to take a 17-10 lead. On the Birds’ next drive, Nelson Agholor fumbled, which led to a Detroit field goal.

Agholor, with Alshon Jeffery and DeSean Jackson out, also had another costly drop. He finished with eight catches for 50 yards and two touchdowns.

Sanders was the victim of a no-call from the referees in the first half during a kick return when Lions special teamer Miles Killebrew forcefully turned the running back’s helmet around, twisting Sanders’ head almost completely around.

The Birds did outgain the Lions, 228-152, in the first 30 minutes but turnovers and a kick return touchdown resulted in 13 points against.

The Eagles, who were down 20-10 at halftime, have now trailed after the first half in each of their first three games of the season.

It was another game filled with injuries for the Birds. Jason Peters left in the second quarter because of an illness and then 2019 first-round pick Andre Dillard left with a knee injury. Peters returned in the second half.

Defensive end Derek Barnett’s shoulder injury was aggravated and he was in and out of the game in the first half. Ronald Darby suffered a hamstring injury in the first half and did not play in the second.