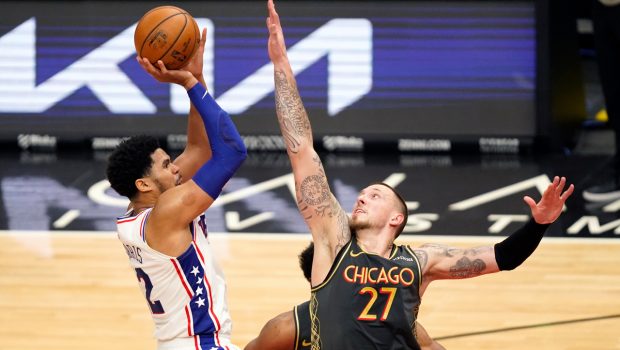 BULLS ARE ROAD KILL AND SIXERS LEAD THE EAST BY A GAME!

Don’t look now, but the Sixers are back in first place in the Eastern Conference and they are healthy enough to close out their race with the Nets, who trail by a game.

It also helps that while the Nets are squaring off with the mighty Bucks, the Sixers schedule is a lot more favorable.

The Sixers built a big third-quarter lead and then held on.

“I wasn’t happy,” 76ers coach Doc Rivers said. “That’s two nights in a row that our bench has come in and kind of given up leads. It’s something that we can fix. They just didn’t play well.”

Coby White scored 23 points for the Bulls, who played without both Zach LaVine and Nikola Vucevic for the second straight game. Thaddeus Young added 13 points in the team’s fourth straight loss and sixth of eight. Chicago remained 12th in the East.

“I thought our guys kept battling and kept fighting,” Bulls coach Billy Donovan said. “I think that this is a good character group. I would hope each and every game we try to put our best foot forward and continue to compete and do the best while we’re out there.”

The Sixers led by as many as 23 points in the third quarter and by 20 to start the fourth. But Chicago went on a 24-5 run to get within 88-87 midway through the final period.

The 76ers responded with a 12-4 run, highlighted by Harris’ floater that made it 100-91 with just over two minutes left.

Philly was playing the second of a back-to-back after outlasting San Antonio in overtime a night earlier.

The Sixers never trailed. Curry opened the scoring with a 20-foot jumper and had 11 points in the first quarter.