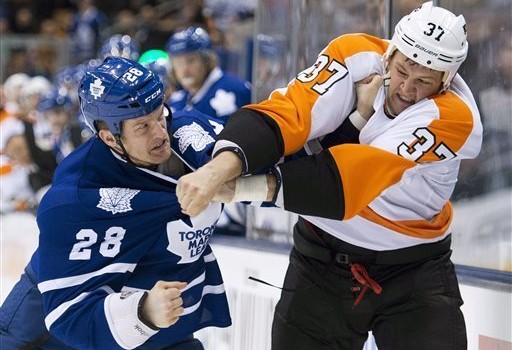 BULLIES NO MORE, FLYERS CLAIM THEY ARE TOUGH ENOUGH

All of a sudden, the Flyers seem to be without their bully-boy identity.

The Flyers waived Jay Rosehill on Friday, inspiring a wave of headlines about this possible change of direction, with CSNPhilly.com even labeling them “The Bully-less Bullies.”

Fans of pugnacious Flyers hockey shouldn’t fret too much, however.

GM Ron Hextall mentioned as much to the press, even as he seems to nudge this team along in a progressive direction.

“We’ve got some toughness on our team,” Hextall said. “Don’t forget that. We’ve got some guys that can handle themselves. I think when you look, there wasn’t a lot of fights in preseason. There never are any fights in the playoffs. And then in between, it’s getting less and less. If we have to adjust at some point, we’ll adjust.”

While Rosehill led the team with 10 fights in 2013-14, there are plenty of players who can drop the mitts if things get out of hand, including guys who can take a regular shift like Wayne Simmonds (six fights last season). Beyond that, Rosehill and and Zack Stortini are just a quick call-up from the AHL. As Hextall said, “it can change in a hurry.”

Some have mentioned Zac Rinaldo, and he’ll certainly drop the mitts with aplomb. Even if he’s heavier than his listed 169 lbs., it’s obvious that he’s not in that “heavyweight” category, though.

Beyond the obvious fact that fighting is both declining in frequency and the clear notion that teams are becoming far less willing to dress a guy who can really do little but scuffle, both Hextall and head coach Craig Berube feel like they’re better off with a more versatile fourth line.

“At this point it looks like we’ll be able to.”

This roster still has its issues (as you can read all about here), so it might be a while before we truly see positive results from the refreshing-yet-possibly-polarizing changes Hextall seems willing to consider.

In the meantime, it might be appropriate to drum up a new nickname. Should we start calling them “The Broad Street Beauties?”