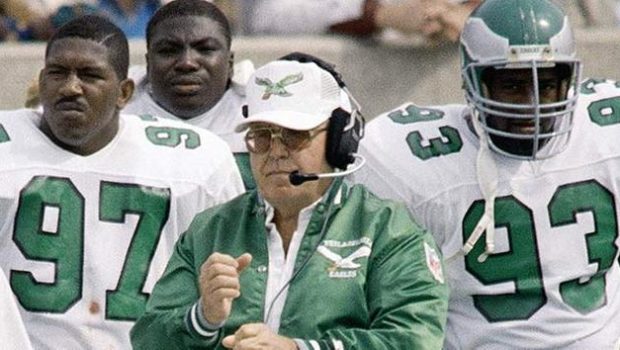 If you poll Eagles sycophants who throw half-full beer cups at the children of Cowboys fans, Buddy Ryan won Super Bowls in each of his five seasons, even though his actual playoff record was 0-3. In fact, one of the Top 10 Philly sports moments was when Buddy tried to sock offensive coordinator Kevin Gilbride in the jaw, even though this happened while he was a defensive coordinator of the Houston Oilers. (He missed on that punch, too, by the way.)

This is actually what Buddy Ryan brought to Philly: WIP sports talk radio idiocy, the Wing Bowl, the 700 level anarchy in Vet Stadium. He brought out the self-mythologized, entitled, Calvin-pissing-on-Aikman’s-jersey side of Philly sports fandom. If you can’t win anything, create a spectacle. Spectacles sometimes have more impact than actual wins and erase actual losses from the historical record. Who needs rings when you can cripple a kicker?