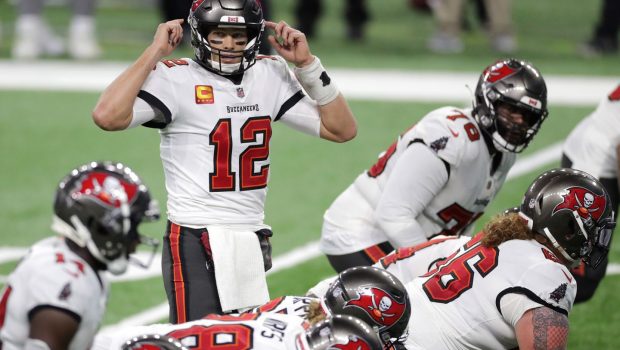 BUCS BRADY MAY BE THE OLDEST, BUT HE’S ALSO SMARTEST QB IN NFL!

As the Bucs Tom Brady shoots for the 7th Super Bowl ring in 10 games tonight, the question is:

How does a 43-year-old in a young man’s game even stand a chance against a way younger gun like the Chiefs’ Patrick Mahomes?

For that, we turn to Ben Volin of the Boston Globe, who covered Brady when he was on the Pats before he left for the Bucs:

Brady isn’t the greatest quarterback in NFL history because he has the strongest arm or the fastest legs or eats the most avocados.

Playing quarterback is about making decisions, and Brady has the quickest mind in the NFL. The highest football IQ. The most firsthand knowledge of any quarterback to ever play the game. The quickest recall of exactly what to do at any given moment.

“I’ve learned way more from him than he’s learned from me,” said Bucs QB coach Clyde Christensen, a coach since 1979 who previously worked with Peyton Manning and Andrew Luck.

Brady has dropped back to pass more than 13,000 times in his 21-year career. He has, by any measure imaginable, mastered the art of quarterbacking.

“The number to be perfect at something, or an expert or exceptional, is 10,000 hours,” said CBS analyst and former Pro Bowl quarterback Tony Romo.

“Well, 13,000 attempts is probably 10,000 hours. And you don’t realize that there’s 100,000 other throws that he’s done before that. You’re seeing a guy who knows the game at a master-class level. It would be like a grandmaster in chess. He knows the chess moves so cold. You’re never going to beat Brady with trying to come up with a new chess move.”