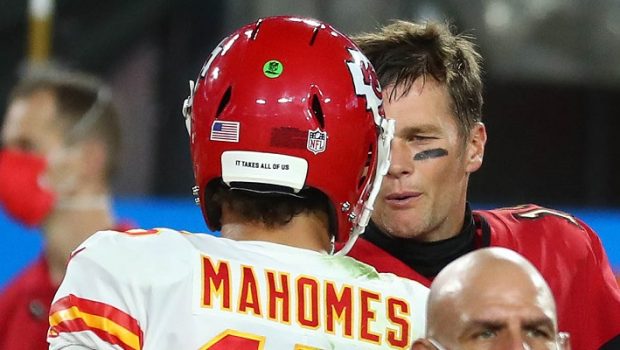 BUCS ARE FAVES TO WIN SUPER BOWL, WITH BILLS AND CHIEFS NEXT!

With 2022 fast approaching, Super Bowl LVI will be here before we know it.

It’s coming back to California for the first time in six years, since Super Bowl 50, and there’s a lot of hype after the pandemic disrupted the 2020 and 2021 seasons and the Brady VS Mahomes rivalry is getting hyped up in NFL media.

Along with every other year, there’s rampant speculation on who is making it past the playoffs in 2022. We have gathered some Super Bowl winner odds and presented them below, along with a rationalization of why some think their team has a chance of reaching the Bowl.

Having mentioned the Brady versus Mahomes rivalry, it’s no surprise that the Tampa Bay Buccaneers and the Kansas City Chiefs are favorites for the 2022 Super Bowl. Brady’s Patriots won the Super Bowl in the 2018 season while the Chiefs won in the 2019 season, and now Brady and the Buccaneers have won Super Bowl LV in the 2020 season, playing against the Chiefs this time.

The press has figured out that there’s a tug of war between Brady and Mahomes. When Brady was part of the Patriots, he shared the AFC with the Chiefs, so only one team hit the Super Bowl at a time. Now part of the Buccaneers in the NFC, the Super Bowl is their battleground.

With all that in mind, Tom Brady seems determined to lead the Buccaneers back to the Bowl in 2022, and many sportsbooks think he has a good chance of doing it. The 43-year old NFL superstar proved he and his team can still outcompete teams like the Kansas City Chiefs, even when they have young talent like Patrick Mahomes at the helm. As always, it’s a question of if the older player’s body can continue delivering that performance going forward.

All 22 winners of the last Super Bowl have been retained, so they’re going back with the exact same team and experience. That team includes wide receiver Mike Evans and tight end Rob Gronkowski too, who shouldn’t get overshadowed by Brady when weighing up the odds. All three of them together have made oddsmakers confident they can go all the way.

After having beaten the Cowboys, the Falcons, and the Dolphins over the past few weeks, their odds have steadily dropped to +550.

With all of this talk of the Buccaneers and the Chiefs, the bookmakers think that the Buffalo Bills could give both teams a run for their money. Having won 13 of their 16 AFC East games, the Bills put in a surprising and impressive performance that helped them storm to the top of everybody’s power rankings. They lost out to the Chiefs, so this year they’re determined to knock them off and face the NFC champions.

The reason they’re second-favorite is probably due to the inconsistency of their plays. While they can hammer the Packers or the Bears in pre-season games, they lost their opening week to the Steelers. That’s the worst possible start but then they clawed it back by beating the Dolphins in week two. After that, they polished off the Redskins, the Texans, and then they beat the Chiefs 38-20, edging ahead of them in odds.

We’ve talked a bit about the Chiefs already – they’re fielding what many consider the best quarterback in the NFL right now with Patrick Mahomes, and his showdowns with Brady have caused a lot of hype with fans and the media alike. Like with Brady’s team, Mahomes shouldn’t outshine other great players like tight end Travis Kelce, wide receiver Tyreek Hill, and running back Clyde Edwards-Helaire. They haven’t gotten anybody noteworthy from the draft but they don’t need to, they have an all-star team already.

They were favorites to win the Super Bowl 2022 but recently took a hit after losing to the Buffalo Bills. This came after a preseason where they beat the Cardinals and the 49ers and won their opening game against the Browns. This put them at +475 but then they flew up to +750 after consecutive losses against the Ravens, the Chargers, and the Bills.