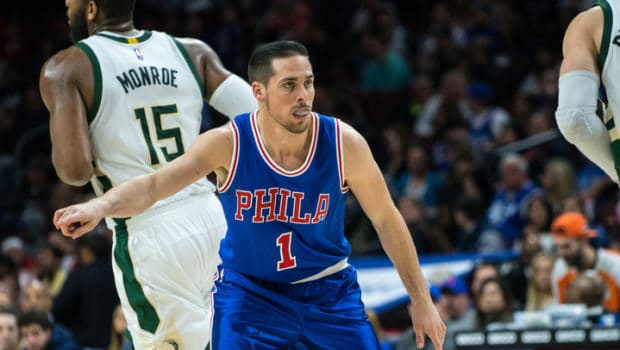 “They did a great job in the third quarter playing playoff-type defense,” Brown said.

“That’s a very athletic team,” said Richaun Holmes, who had 17 points and 10 rebounds. “They did a good job of switching, forcing us out (away from the basket) and being tough in the third.”

“The whole second half, we were flat and didn’t bring energy,” Nik Stauskas said. “We weren’t making shots. On the defensive end, we had a few missed assignments and that led to easy baskets for them.”

The defeat kept the 28-52 Sixers tied with the Magic for the fourth-worst record in the NBA.

The 41-39 Bucks secured their postseason berth with the victory, combined with the Bulls’ loss to the Nets.

T.J. McConnell (above) contributed 10 points and 10 assists for the Sixers, who close out the home schedule against the Pacers tomorrow night.

The Bucks hurt the Sixers inside, as evidenced by their 52-30 edge in points in the paint.

A matchup of two of the top NBA Rookie of the Year candidates didn’t materialize because the Bucks’ Malcolm Brogdon (sore lower back) sat out for the fifth straight time. Meanwhile, Sixers’ first-year pro Dario Saric had 14 points and eight rebounds in 24 minutes. He’s on a 24-minute guideline due to plantar fasciitis of the left heel.

The Sixers’ Joel Embiid would’ve been the runaway winner if he had appeared in more than 31 games due to injuries.

“There’s going to be debates up until when it’s announced,” Milwaukee head coach Jason Kidd said. “I think for us, we believe Malcolm has done a great job and put himself in position to win it, and you’re talking about a very talented class that could go to any one from the Sixers. They have two candidates and we have one. It will be interesting to see who wins it.”