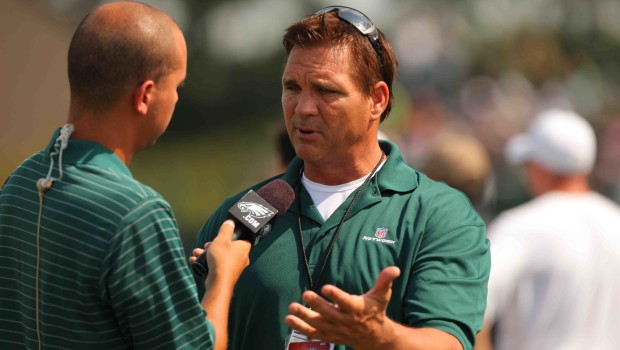 In this Philly sports media echo chamber, everybody and his or her cousin has a megaphone through which to blather on as if they were the one last honest man Diogenes searched ancient Greece for:

Bubbleheaded Inky columnist Bob Brookover admits he had never seen Markelle Fultz play but doubled down that trading up two spots for him was a gamble not worth taking.

Stick-figure freak Jimmy Kempski of Philly Voice and NJ.com phony Eliot Shorr-Parks — for whom the Eagles are a religion on the order of Scientology — treat the Birds like an endangered species. You never know if Shorr-Parks is an analyst or a groupie. He’s actually a typist, not a writer, and he really counts how many passes Carson Wentz throws every training camp day, and also to whom they are thrown. And the point of that is what???

And of course the flacks posing as reporters who let everything that the Flyers screw up pass without a discouraging word on CSN, which should be renamed FSN — FlyersSportsNet — since its proprietors also own the team.

Not to mention the array of talk radio low foreheads who take a ridiculous position to grab ratings, and then they are gone to another station, city or planet — the list is endless but Josh Innes is the leader in that clubhouse.

So it is refreshing when you find someone who doesn’t equivocate like a politician with his finger in the wind and who actually knows football like the back of his hand:

Brian Baldinger, whose mantra doesn’t go back to the Greeks — but David Mamet’s Ricky Roma in “Glengarry Glen Ross”:

“Tell the truth — it’s the easiest thing to remember.”

Baldinger was a 12-season offensive lineman with the Cowboys and Colts before ending his career with the Eagles in 1992-93, and liked Philly well enough to stay and prosper.

Baldy avoids conventional wisdom, which allows him to make judgments that are often right, sometimes wrong but never in doubt.

Only he and Hall of Famer Ray Didinger and Mike Missanelli of 97.5 the Fanatic have the chops and the balls to call out failure when no one else will.

For everyone else, it’s “on the one hand and on the other hand, let’s open the phones to Deirdre from Doylestown.”

I first recognized his ability to cut through the argle-bargle that you hear on talk radio when Donovan McNabb played two of the worst consecutive games in Eagles history against the dreaded Cowboys in the last game of the 2009 season and the first game of the playoffs.

Of course, the next day the Fanatic and WIP were filled with hosts and callers in a twist about the season-ending loss, and especially with McNabb’s pre-game antics including playing an air guitar.

But only two voices called out McNabb for the over-the-hill performer that we all saw and said the Birds should replace him — a previously unheard of suggestion: Baldinger and Missanelli, who doubled down with coach Andy Reid at a press conference.

After defending McNabb and saying he would be the starter in 2010, Reid traded him to the Redskins three months later.

Into Ruth’s Chris at 18th and Market strides Baldinger in shorts and running shoes, looking ready for the beach and his fall work schedule: every Saturday at a Big 12 college game on Fox and Westwood One and every Sunday at an NFL game, plus his regular guest spots on the Fanatic and CSN on “Quick Slants.”

And Baldy is loaded for bear.

“In the first place,” he says, “the Eagles did well in the draft and I think you could see the hand of Joe Douglas [VP of personnel, hired from Ravens], and personnel director Andy Weidl [also hired away from the Ravens).”

And how about the picks?

“I like Derek Barnett in the first round, but they could have had Dalvin Cook [a stud running back who went to Minny] or linebacker Reuben Foster [who is being tutored in Ninersland by ex-Eagle DeMeco Ryans.]

“What I like about Barnett is his mindset. He’s got a professional approach. And to me he looks a lot like what Baltimore did with Terrell Suggs [the six-time Pro Bowl linebacker/defensive end]. He’s a stud.

“He is Allen Iverson in a football uniform. No team needs four running backs active.”

This year’s receivers: “Last year’s were clowns, so they don’t have to go far to be better.”

The offense: “Much better this year than at any time last year, even the first three games, which were all wins.”

Ike Seumalo: “If he can handle the mental part of the game, he’ll challenge Jason Kelce to be the center. Wisniewski is a competent back-up.”

Super Bowl: “The Eagles are still a long way from being a contender.”

Colin Kaepernick: “I do think that his anthem protested has definitely affected his job search. I believe he will play again this season. He did opt out of his $17 million contract to become a FA; so he clearly misjudged the market

“Collusion is not at play, just the definition of the word will tell you that that idea is impossible.Teams are battling each other, not colluding with one another

“But make no mistake, teams that might have had interest in him as a backup QB are worried about what level of his activism, real or imagined.”

Doug Pederson’s decision to barely play starters in first two exos: “Mysteriously the Eagles have played Carson Wentz and the No. 1 offense a grand total of 27 snaps, as opposed to say the Bucs’ Jameis Winston who has 30 completions in his 2 games…Carson and the O have to play more since the entire cast around Carson is new. The point is that it’s too small a sample to be worried about Blount or anyone else.”

Zach Ertz: “He is a real problem at TE. It’s hard to believe that he can truly be the starting TE as limited as he is as a blocker. They have to cobble that position together.”

Jason Peters: “He is a difference maker so they really missed him last Thursday night; but to think that Jason can give you 16 great starts and beyond is almost fantasy at his age [35].”

Jags QB Blake Bortles: “Mechanically, he’s not good. He’s got a long wind-up, he’s got a long motion, and he’s just not accurate. At some point, you either can throw the ball through the tire, or you can’t. Either you can hit a moving target or you can’t. You’re not going to take Blake Bortles to the state fair and win the big teddy bear. He’s just not going to pop balloons for you – and that’s what you got to do in this business. It hasn’t changed.”