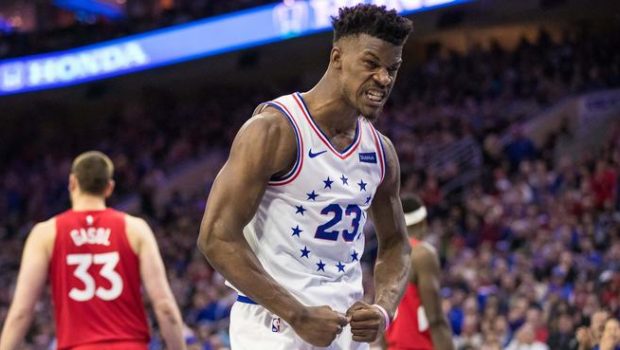 BUCKETS MAKES SURE SIXERS FORCE A GAME 7 AGAINST RAPTORS!

He scored 25 points against Toronto in the Eastern Conference semifinals as the 76ers won 112-101.

Game 7 is Sunday night in Toronto.

Kawhi Leonard, who had scored 30-plus points in four of the first five games against Philly, was tied up early and hit 29 points well after the game was out of hand.

Leonard and the Raptors had no answers for Butler and the All-Star guard Ben Simmons. Simmons broke through and scored 21 points, helping to show that the Sixers still had some fight after a brutal Game 5 loss.

Joel Embiid, who had played through a bad left knee and a stomach bug for most of the playoffs, had a burst of energy late in the third when he blocked a driving Leonard, and Simmons capitalized with a basket for an 18-point cushion.

Embiid didn’t do much early in Game 6, but Butler and Simmons built some needed separation.

Butler showed why he is poised to command a max contract in the off-season. He made 9 of 15 shots in the first and gave the Sixers the confidence they needed to know another game wasn’t going to turn into a rout.

Butler had called out Simmons about the need to attack the basket and play more off screens to become the triple-double threat he was in the regular season and not the non-factor he was against the Raptors. Simmons did it all early (8 points and 5 assists in the first quarter), and the Sixers got the outside shots to fall.