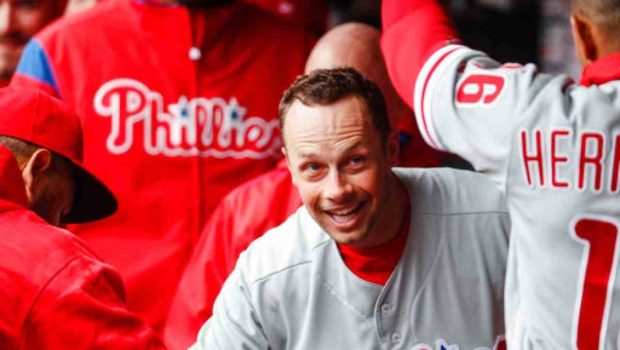 Relief pitcher Michael Lorenzen connected for a pinch-hit homer that put Cincinnati ahead and the Reds overcame a rough major league debut by Rookie Davis to beat the Phillies 7-4 yesterday.

Adam Duvall also homered as the Reds rallied from an early three-run deficit to take the opening series, winning two of three.

Lorenzen’s solo homer — the second of his career — off Adam Morgan (0-1) put the Reds ahead 5-4 in the sixth inning. Manager Bryan Price used the reliever because he’s working with a short-handed bench to start the season. The Reds’ last pinch homer by a pitcher came in 2009, when Micah Owings connected off the Cardinals’ Ryan Franklin.

Lorenzen didn’t pitch in the game. Cody Reed (1-0) got his first major league win by escaping threats in each of his two innings. Drew Storen pitched the ninth for his first save since the Reds signed him to a one-year, $3 million deal.

The Phillies blew a 4-1 lead set up by Daniel Nava’s pair of homers off Davis.

Nava hit a solo shot on Davis’ seventh pitch in the majors. He added a two-run homer in the third. The last Phillies player to homer in his first two at-bats with the team was Jeremy Giambi in 2002, according to the Elias Sports Bureau. It was Nava’s first career two-homer game.

Davis got his nickname from his father, Billy, who hoped his son — William Theron Davis III — would become a baseball player. Davis lasted three innings, gave up five runs, and had a rookie mistake. After Nava homered in the third, Odubel Herrera doubled, advanced on a groundout and scored on a wild pitch, aided by Davis’ failure to cover the plate.

Clay Buchholz, who came to the Phillies last December for infielder Josh Tobias, couldn’t hold the lead. The Reds tied it with three runs in the fourth, highlighted by Zack Cozart’s single.

Duvall hit a two-run homer in the seventh.

The temperature at game time was 43 degrees. Rain fell steadily on the crowd of 10,586.