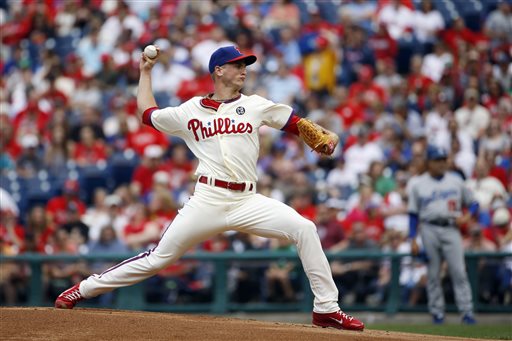 BUCHANAN MAKING HIS CASE TO BE IN PHILLIES’ ROTATION

With Cliff Lee out forever and Cole Hamels still on the trading block, the Phillies’ pitching staff has been shaken up and spun dry.

So, David Buchanan is taking advantage.

Expected to be the Phillies’ No. 4 starter, Buchanan struck out three and walked none. He has given up one run over 12 innings in his last three games.

”It’s exciting, honestly, but I’m not really trying to get caught up in that,” Buchanan said. ”I haven’t heard anything. I don’t know anything. The first two outings I was really trying to prove myself because of last year and what happened and ended the year on the team. I was really stressing to try and prove myself to get another spot, and I think that’s why I wasn’t throwing well, because I was worrying about things I didn’t need to worry about.”

Asche put the Phillies ahead in the second with his third home run in five games. The drive came off Mike Pelfrey, who gave up two runs – one earned – and seven hits in 4 2-3 innings.

”I think he got a little spent near the end, so that was good to extend him,” Twins manager Paul Molitor said of Pelfrey.

Buchanan incorporated more changeups during his five-inning outing. Buchanan said it is a pitch he throws often during regular-season starts, but he always relies on catcher Carlos Ruiz to make the right calls behind the plate. ”I’m not even concerned about the hitter, because I know whatever he calls, it’s probably the right pitch to throw more often than not,” Buchanan said.