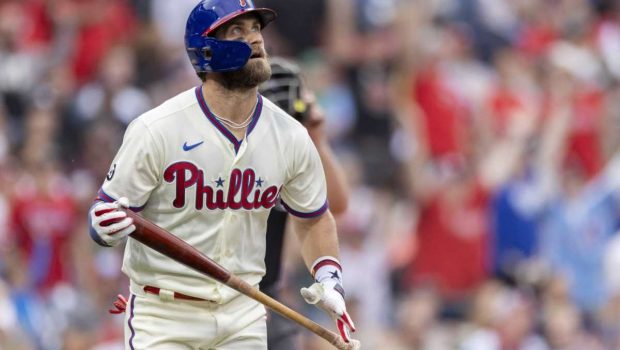 Bryce Harper’s MVP award is meaningful on so many levels.

It shows that the Phils were dead on the money when they shelled out $330 million over 13 years to sign him as a free agent in 2019.

That will also help them attract new free agents, which they surely must do since they have no talent in the minors.

And it also is a cautionary tale for the Nats, who let Harper walk and now are faced with another megastar in the same boat for big bucks.

Harper’s MVP is a tangible reminder that what sounds outlandish in theory can be completely reasonable in reality.

And it should be noted by his original employers, the Lerner family, who own the Nationals, because the runner-up to Harper in the MVP voting was none other than his successor in right field in Washington: Juan Soto.

It’s that transparent, isn’t it? Saying “Bryce Harper is worth it” is simply code for “Pay Juan Soto.”

The Nationals should offer Juan Soto $500 million. Yes, you read that correctly.

It’s now Soto, not Harper, who is the 23-year-old centerpiece not only of the Nats’ organization but potentially all of baseball.

It’s now Soto, not Harper, who could be kept in Washington for the rest of his career, winning who-knows-how-many MVP awards before he’s done.

It’s now Soto, not Harper, who’s in line for a payday that will make your jaw drop — until it’s swiftly and inevitably surpassed by the next transcendent player. That’s just how this works.