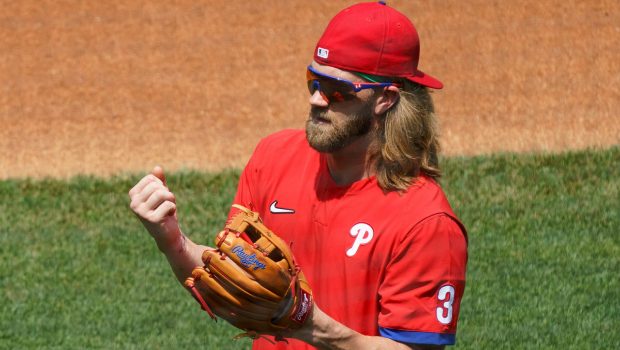 BRYCE HARPER DOES AN INNING AT THIRD IN PHILS DRILL!

“You look good,” manager Joe Girardi said, according to MLB.com.

“Do you think I’ll play third one day?” Harper said.

But yesterday Harper begged Girardi for another shot.

“I think it’s important that the guys have fun in the game. There’s always that little risk, so you try to minimize the risk.”

“There is no diving,” Girardi said.

“No,” Girardi repeated. “There is no diving.”

“Yes, my arm is really loose.”

Harper stood at third base for six outs of the scrimmage game. Kyle Garlick hit a ball toward Harper in his second half-inning of work. He fielded the ball cleanly and made an accurate throw to first base. Harper jogged off the field. His dalliance with the hot corner had ended.