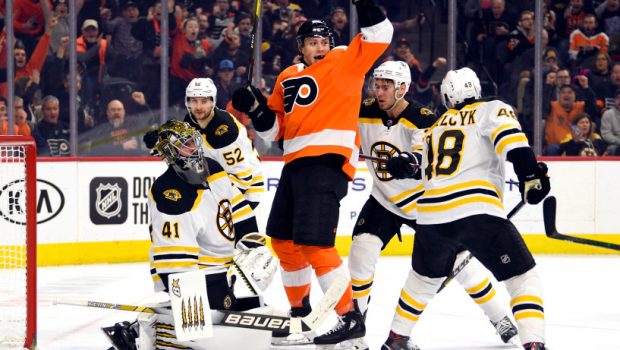 BRUINS COUGH UP A 3-GOAL LEAD AND FLYERS WIN IN SHOOTOUT!

After the Boston Bruins blew a three-goal lead, the Flyers Travis Konecny scored the only shootout goal and it ended when the Brad Marchand flubbed the puck at the center dot. Because he touched the puck and it moved a couple of inches forward, it was ruled a failed attempt and the game was over, with the Flyers taking a 6-5 win at the Wells Fargo Center.

After finding themselves down 5-2 midway through the game, the Flyers scored two quick goals before the second was out and then tied it up with 7:02 left in the third when Travis Sanheim, during a 4-on-4, scored his second goal of the game when he popped a third opportunity shot past Jaroslav Halak from the low slot to make it 5-5.

In the overtime and in the shootout, Halak had made several outstanding stops, but he was not sharp in regulation. After the first half of the game, that could be said of a lot of Bruins. It was the kind of loss that would have most coaches seething, and Bruce Cassidy, on this night, was like most coaches.

“You can talk about the goaltending, you can talk about the D in front of them. I think they can both take their share of the blame, especially the 4-on-4 goal,” said Cassidy. “You’ve got three different guys circling out. … It’s inexcusable. You’re in the third period, you’ve got a lead that’s gotten away from you, we’re pretty good at buckling down. I don’t know what to tell you on that particular play. No compete in front of the net, no urgency to keep the puck out of the net from three of our players. Not sure if the goalie could have covered it, to be honest with you — there were a couple like that in front of our net — clearly not a good enough job. So good for Philly for sticking around and getting inside. That’s what they did. We weren’t able to move them out of there and had no will to move them out of there.”

The Flyers climbed back to within a goal after scoring a pair in 1:34. Neither was a thing of beauty. On the first one at 13:12, Sean Couturier fanned on the puck when he tried to go to his backhand, but the puck was somehow able to slide under Halak’s stick and between his legs. Then the Flyers made it 5-4 when Mark Freidman’s long distance shot hit Connor Bunnaman then went off Matt Grzelcyk’s leg and in.

It stayed that way until Torey Krug and Joel Farabee were sent off for roughing, creating the 4-on-4. On the equalizer, Brandon Carlo lost the puck behind the net after a rebound and with Grzelcyk and Coyle on either side of the net (Marchand was out high), the Flyers got a couple more cracks at it, the second of which was Sanheim’s shot from the top of the crease.

The teams traded chances in OT and then in the shootout Konecny scored in the fifth round before Marchand’s muff ended the game. There was brief chat among the officials before the game was rightfully ruled over. Pastrnak, Coyle, Jake DeBrusk and Krejci were stopped before that.

“Yeah, I know the rule. You touch it on a penalty shot, that’s your shot,” said Marchand. “It’s unfortunate, a tough way to lose on a play like that, but we’ve got to be better when we have the lead.”

Said Cassidy: “Listen, we’re having trouble scoring, whether we collect the puck or not. You’re not going to win any shootouts if you don’t score. If you look at our record, I think that’s probably a much bigger factor than our goaltending in the shootout. We just don’t score. There’s a reason we’re 0-7.”