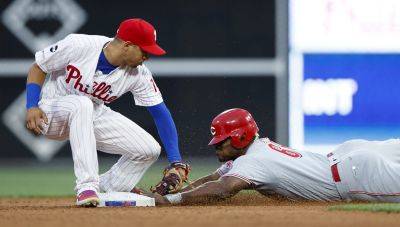 BRUCE AND EFLIN KEEP PHILS IN 1ST PLACE BY 2 GAMES!

Jay Bruce hit a two-run homer, Zach Eflin threw 6 1/3 sharp innings and the Phillies beat the Cincinnati Reds 4-2 to maintain their two-game lead over the Braves in NL East.

Bruce is the first Phillies player who debuted with the team in the modern era to hit four home runs in his first four games with the team, according to the Elias Sports Bureau.

“I’m excited to play in front of people, a lot of them,” Bruce said. “Not to take away from any other situations I’ve been in, this place is different. I’m excited.”

Joey Votto hit a solo shot for the Reds, who have dropped four of five.

Eflin (6-5) gave up two runs — one earned — and four hits. An injury-depleted bullpen missing seven relievers got eight outs, with Hector Neris finishing for his 13th save in 13 tries.

Reds starter Tyler Mahle (2-6) cruised through the first four innings. But J.T. Realmuto led off the fifth with a single and Bruce followed with an opposite-field shot to left-center to give the Phillies a 2-1 lead.

“He’s as good as I’ve seen him,” Phillies manager Gabe Kapler said of Bruce. “We’re lucky to have him right now.”

Scott Kingery followed Bruce’s drive with a single and later scored when catcher Tucker Barnhart tried to pick him off third and made a wild throw for an error.

The Phillies got an insurance run in the eighth on a throwing error by shortstop Jose Peraza trying to complete a double play. Cesar Hernandez and Bryce Harper hit consecutive singles before Jean Segura’s grounder to second base turned into a run.

“We believe our guys will come through in that situation if we keep getting opportunities,” Reds manager David Bell said.

Votto hit an opposite-field homer to left to give the Reds the lead in the first. Jose Iglesias’ RBI single in the sixth cut it to 3-2.

“Other than one pitch, he was outstanding against a good lineup,” Bell said.