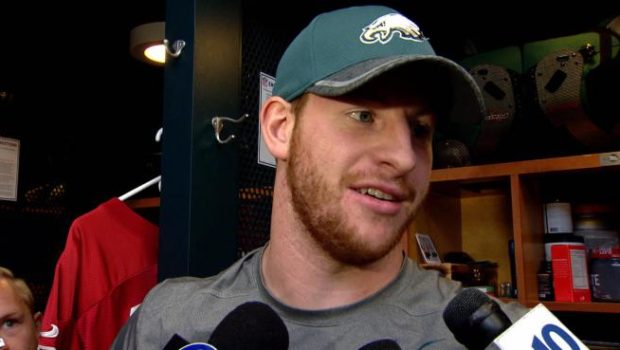 He is not only head coach of the Cleveland Browns, a woeful team which will undoubtedly fire him sooner than later. Probably sooner.

But he also has to play the fool when asked why he didn’t draft Carson Wentz, who torched the Browns in the Eagles’ 29-10 victory on Sunday.

Wentz is in Philly because of a pre-draft trade with the Browns that netted Cleveland a first-round pick next year as part of a package of selections through 2018.

The Browns didn’t feel Wentz, who went 22-of-37 for 278 yards and two touchdowns on Sunday, profiled as a top-20 quarterback in the league and coach Hue Jackson said on PFT Live last week that the quarterback wasn’t the “right fit” for his offense.

Jackson said his view didn’t change based on Sunday’s performance.

“No, we haven’t [second-guessed],” Jackson said, via Cleveland.com. “That’s one thing I can tell you for sure has not happened. He had a good game, a great game if you guys want to term it that, and I respect that. He’s a fine young man and they have good coaches and a good organization, and he is going to do well for them, but that was one game. He played well. Like I said, we’ll look back and see where he is over a period of time, but the Browns have to get better. That’s what we have to do. We have to play better, and I think we all understand that.”

One would hope that no one’s opinion about such a big decision would be swayed by one good or bad game and watching the Browns on Sunday certainly supports the notion that there’s plenty of places where the team needs to improve in 2016 and beyond. All of the picks they got in the Wentz trade can be put toward that use and one should be ticketed for a quarterback whether or not there any hope remains thatRobert Griffin III, who went on injured reserve Monday, could be at least a short-term answer at the position.