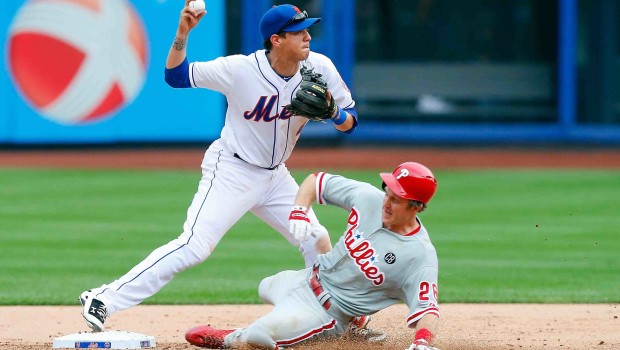 So, Domonic Brown finally breaks out of his seemingly career-long slump, and the Phillies still can’t take advantage to get a win.

Anthony Recker snapped a sixth-inning tie with a three-run homer in a rare start, and the New York Mets held off the Phillies 6-5 Sunday to avoid dropping into last place.

Wilmer Flores had three hits and made two sparkling defensive plays at shortstop in the final two innings to help New York hang on. By taking two of three in the series, the Mets kept Philly in the NL East cellar.

Dillon Gee (6-6) pitched effectively into the seventh inning, and New York finished 13-6 against the Phillies this season.

Brown homered and had a career-high four hits for Philadelphia, but grounded out with a runner on to end it. Ryan Howard also went deep.

Recker, a backup catcher who had not played since Aug. 19 in Oakland, lined the first pitch he saw from A.J. Burnett in the sixth into the left-field seats to give the Mets a 5-2 lead. The home run was only his third hit since the All-Star break.

Burnett (7-15), who has struggled mightily this season against the team that drafted him, looked sharp early on but ended up allowing five runs and nine hits over six inconsistent innings.

With the bases loaded in the fourth, Wil Nieves grounded into a double play started by Flores. Ben Revere was left at third when Jimmy Rollins struck out in the fifth. And in the sixth, Gee struck out Nieves with runners at the corners before Cody Asche flied out to deep right-center.

Brown drove Jeurys Familia’s third pitch just over the left-center fence leading off the eighth to pull the Phillies to 5-4.

Mets rookie Dilson Herrera, who made his major league debut Friday night, added an important insurance run in the bottom half with his first career RBI, driving in Kirk Nieuwenhuis with a single.

Philly put its first two hitters on in the ninth before Herrera and Flores turned a tough double play against Howard. Grady Sizemore had an RBI single before Jenrry Mejia retired Brown for his 21st save.

Flores also helped Familia with a diving play on Revere’s hard-hit grounder to end the eighth.

Howard hit a solo shot in the sixth, reaching 20 home runs for the eighth time and first since 2011.