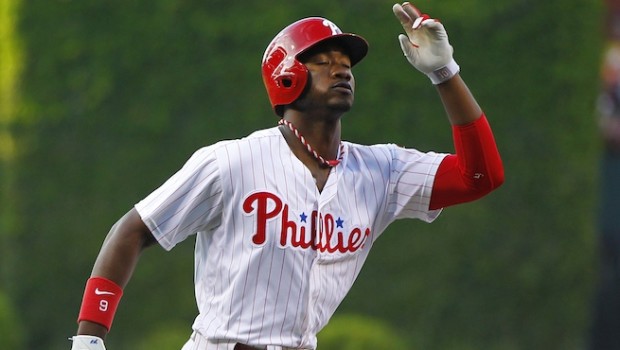 As the Phillies came home to beat the Marlins, the Forgotten Phillies continue to rehab in the minors.

Chad Billingsley missed his scheduled rehab start Monday because of a stomach illness. He could make that start this week.

Billingsley, 30, has a 3.24 ERA in two rehab starts with Triple-A Lehigh Valley. He has allowed six hits, three runs, three walks, two home runs and has struck out seven in 8 1/3 innings. He said last week he planned to make five rehab starts before joining the Phillies’ rotation early next month.

Meanwhile, outfielder Domonic Brown (photo above) continues a lengthy rehab assignment at Triple-A. He has been out since the season started because of inflammation in his left Achilles.

Brown has a maximum amount of 20 days to rehab before being activated from the DL. His 20th day is next Tuesday. It appears the Phillies are going to let Brown play the maximum amount of days, unless his bat picks up.”It’s kind of up to him when he finds his stride to get hot with the bat,” Phillies manager Ryne Sandberg said. “I think that would be important for him.”

Brown is hitting .200 (6-for-30) with one double, one home run, four RBIs and a .639 OPS in rehab games with Class A Advanced Clearwater and Lehigh Valley.