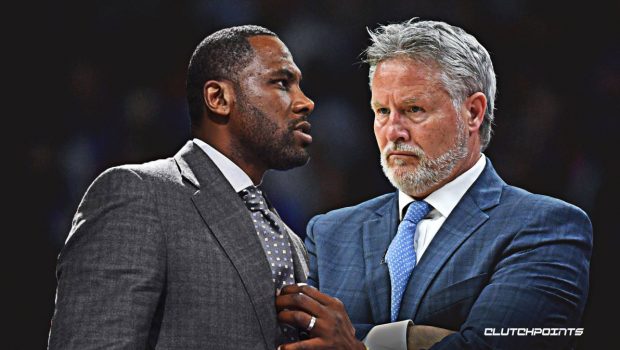 BROWN DESERVED THE BOOT BUT SIXERS FRONT OFFICE DOES TOO!

Let’s get real about the Sixers firing of Brett Brown after seven years as head coach:

He deserved to go because he is a mediocre bench coach who was way too slow to adjust to what was going on on the floor.

He was woefully outcoached in the first-round sweep by the Celtics Brad Stevens, who is a master bench coach.

Brown could never figure out how to get Joel Embiid to stay on the low block, Ben Simmons to shoot or Al Horford to fit in.

Yes, he was ineffectual.

But it wasn’t all his fault.

In seven season, Brown served under three separate front offices in his time with the Sixers, and in that span, the organization made the following moves:

Hired Elton Brand as GM, who had no experience in the position

Traded away Landry Shamet, their own lottery-protected first-rounder in 2020, Miami’s unprotected first in 2021, and two second-rounders for Tobias Harris, Mike Scott, and Boban Marjanovic

Signed Tobias Harris to a five-year, $180 million contract to be the 3-point shooter they’d been missing; Harris made two 3s all series against the Celtics

Signed Al Horford to a four-year, $109 million contract; he was rendered useless